They liaised and even went shopping for fittings with their ID virtually.

In the three months that it took to complete the major makeover on this four-room flat in Cantonment Close, the homeowners were still living abroad. Since they weren’t physically around to oversee the progress, updates and even shopping for fittings were done virtually with the interior designer that they'd engaged, Jac Teo of Hansel Studio.

Renovations cost about $101,000 for the 800 sq ft space that the Singaporean couple would call home when they moved back to Singapore. Prior to this, the 22-year-old flat had a dreary, dated look — previous homeowners did minimal works to the space. Even the original wall and floor tiles provided by HDB were still intact.

A total transformation was on the cards as the new homeowners wanted a modern Japanese-meets-Scandi — or Japandi — look. Layout changes, though subtle, had a huge impact. The homeowners requested for a larger living and dining area while keeping all three rooms intact.

To reconfigure the floor plan, the internal walls of the three bedrooms had to be demolished and new walls rebuilt. 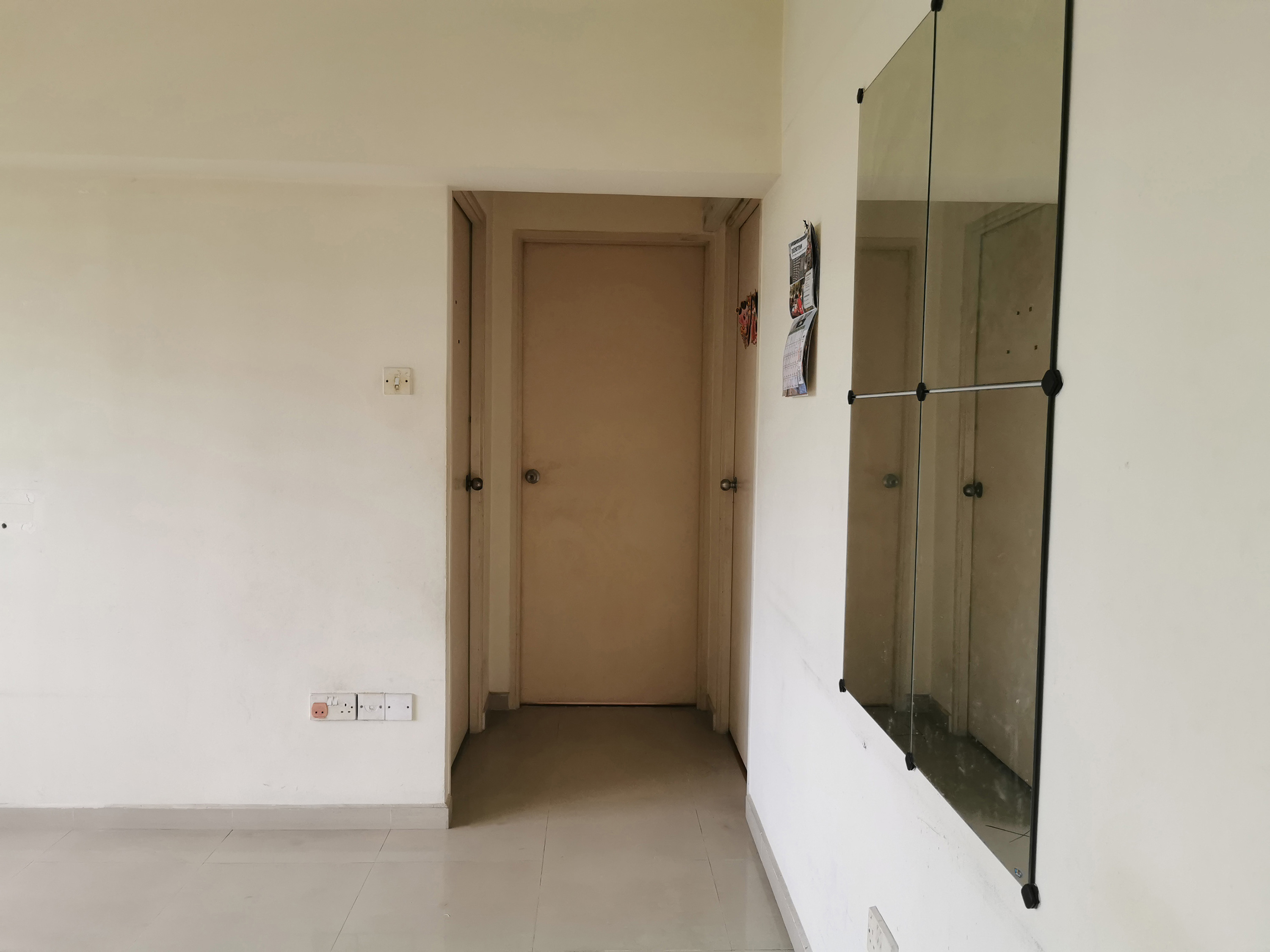 “We shifted the guest room entrance further in towards the back of the apartment and relocated the master bedroom door to the end of the hallway. We also carved out a smaller but comfortable amount of space for the study,” Jac explains. 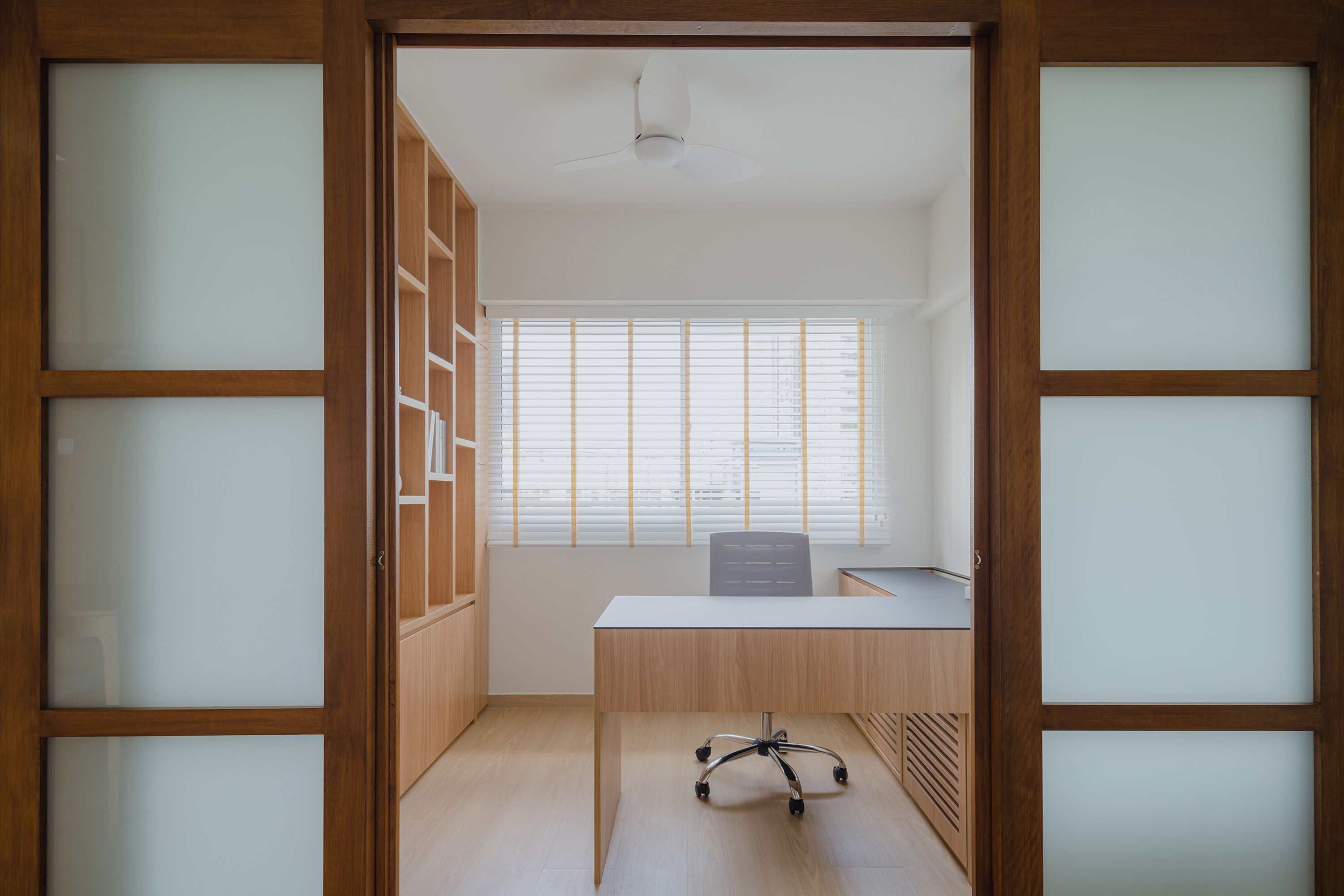 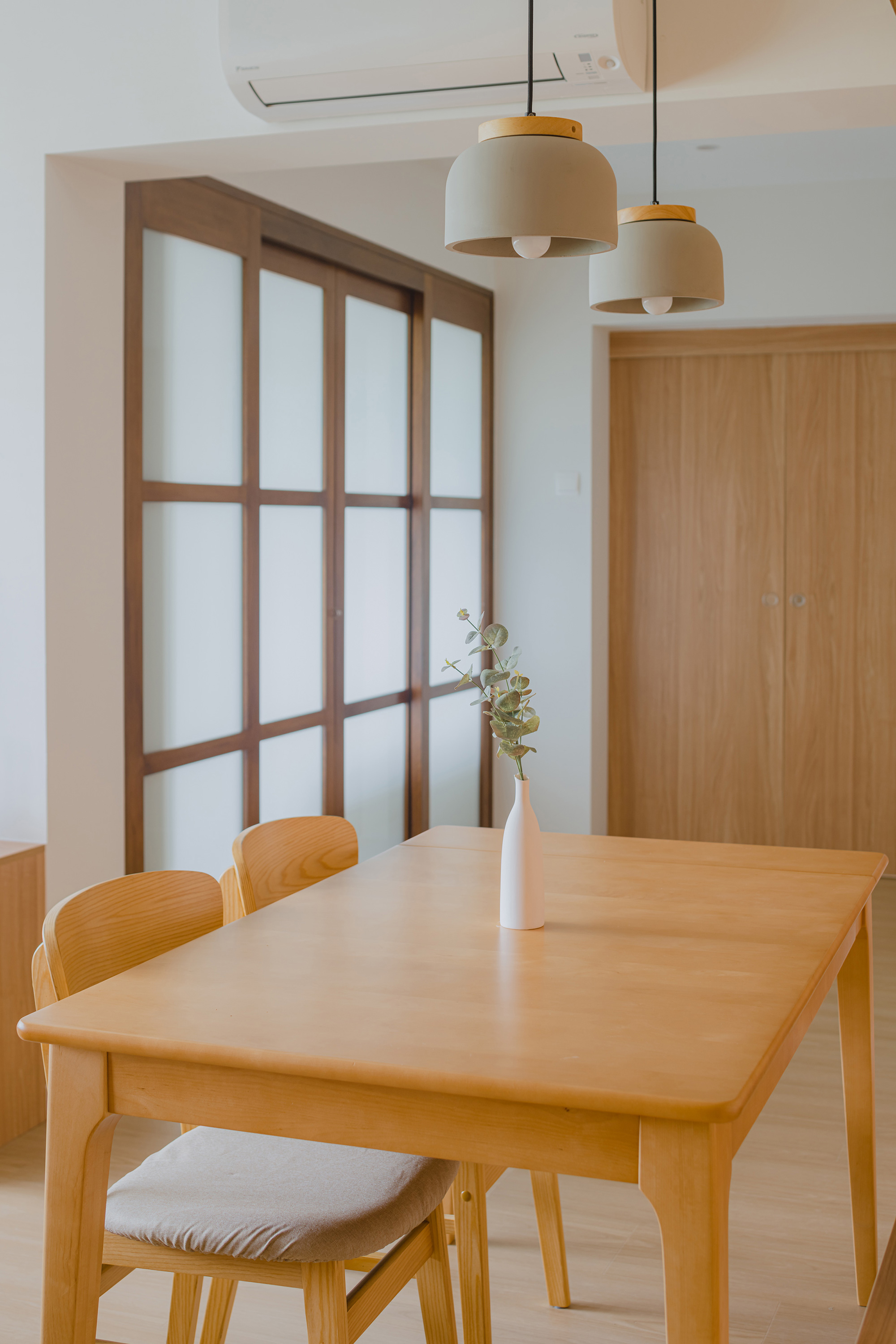 The shoji screen with a modern twist (frosted glass instead of paper was used) allows more natural light to flow in to the formerly narrow and dark hallway.

Upon entering the apartment, you’re greeted by the zen haven that is the living and dining area. 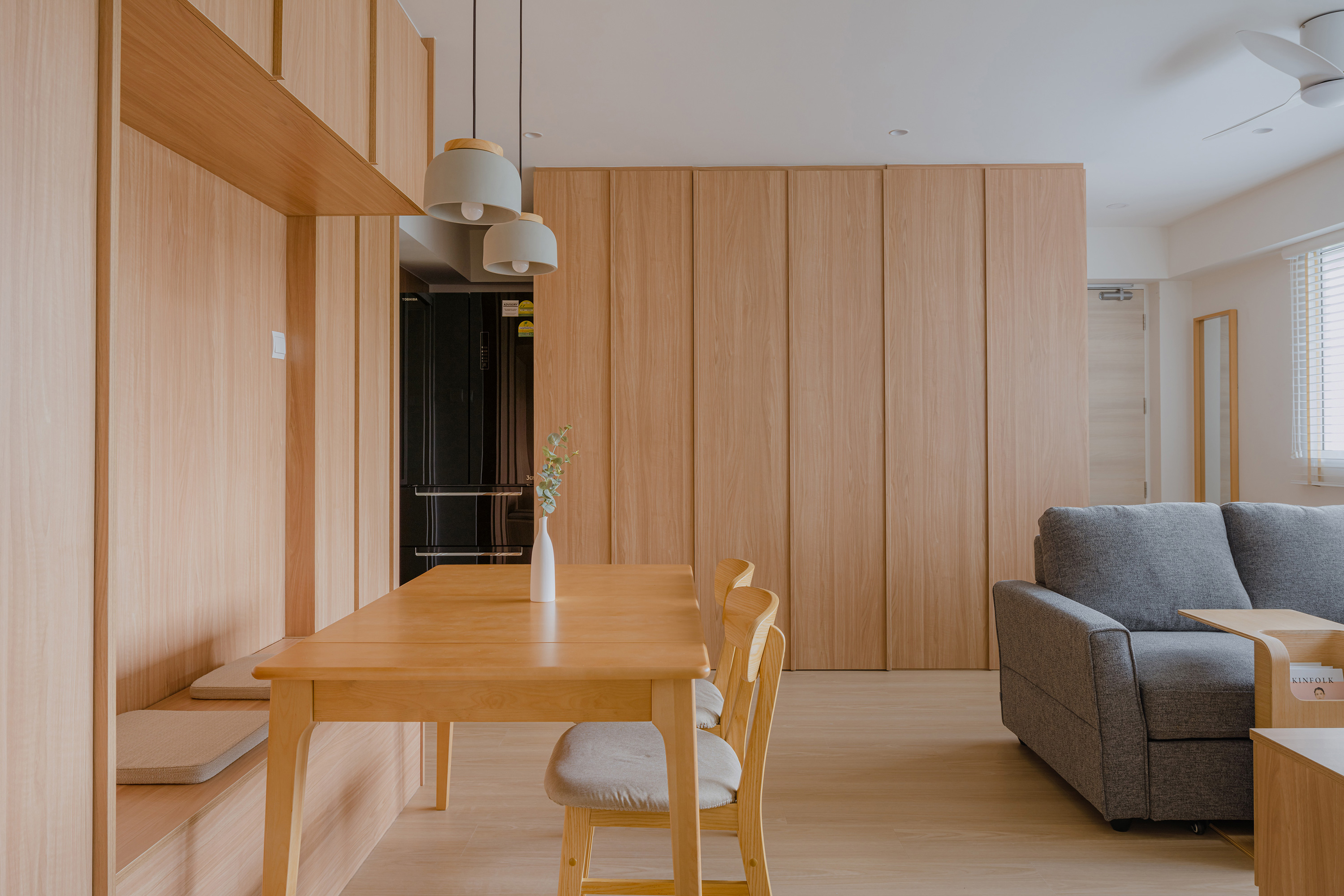 The crisp and clean space is bathed in natural light, which accentuates the light-hued wood finishes of the full-height carpentry that runs along two sides of the room. These clean-lined structures cleverly conceal the entrances of the household shelter (below) and common bathroom, which had its entrance moved from the kitchen to the living room instead. The pragmatic approach to the kitchen’s overhaul can be seen from the major changes right down to the minute details. 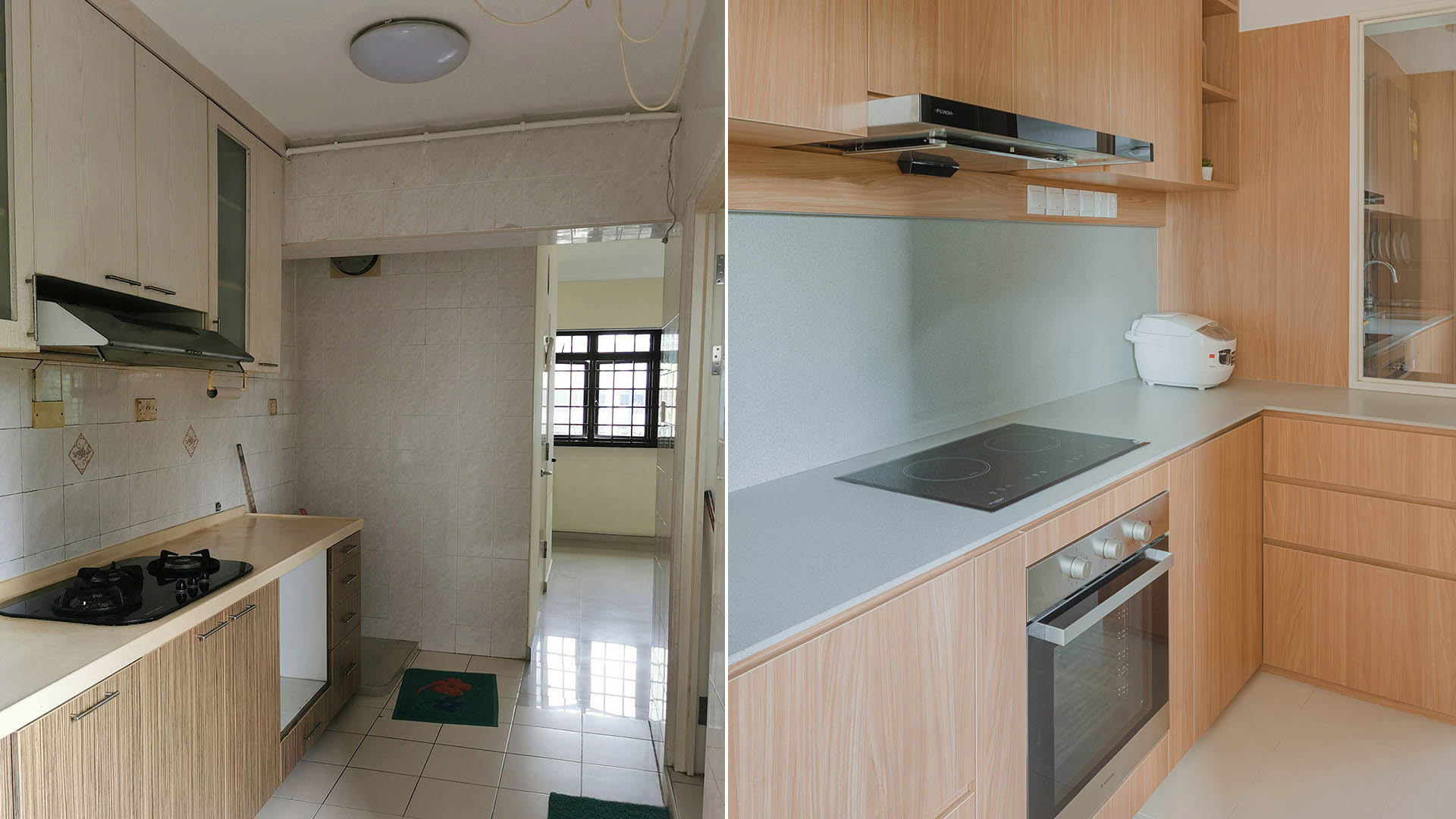 For starters, the homeowners bucked the trend of an open-concept kitchen and requested that they be able to close up the kitchen while they were cooking.

Other simple but thoughtful details you’ll find here include cabinetry with niches for specific appliances like the microwave oven, and the power points are built in these niches, which not only frees up countertop space for food prep, but keeps it clutter-free as well.

Dish racks are usually installed above the sink, but over here, it’s beside the sink to suit the petite homeowner, Jac explains.

The master bedroom needed to be a cosy but still functional retreat for the homeowners. 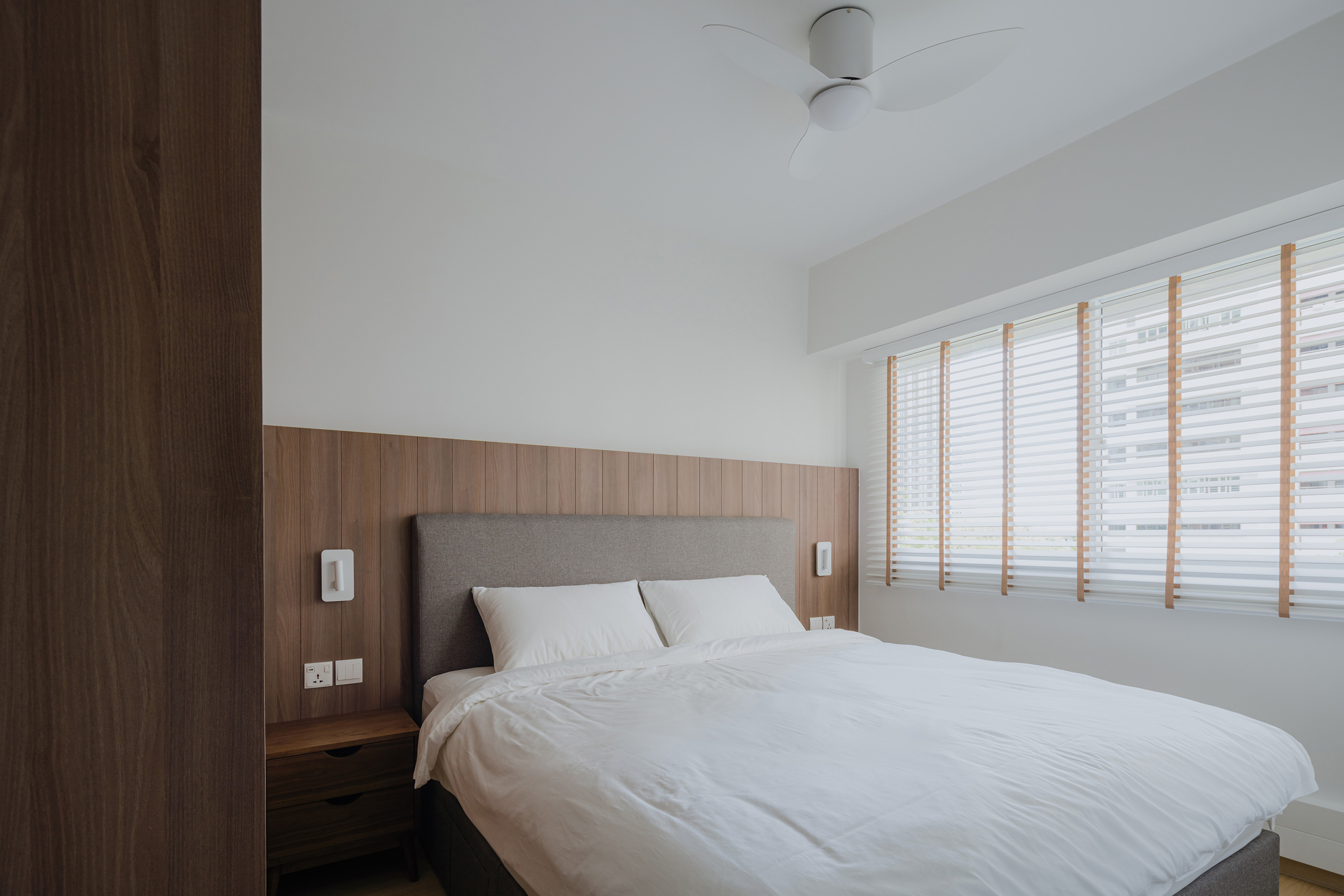 They wanted to accommodate a king-sized bed and a walk-in wardrobe here, which was made possible after the space was expanded and the room’s entrance was shifted. The minimalist Japandi aesthetic carries through to both bathrooms as well. 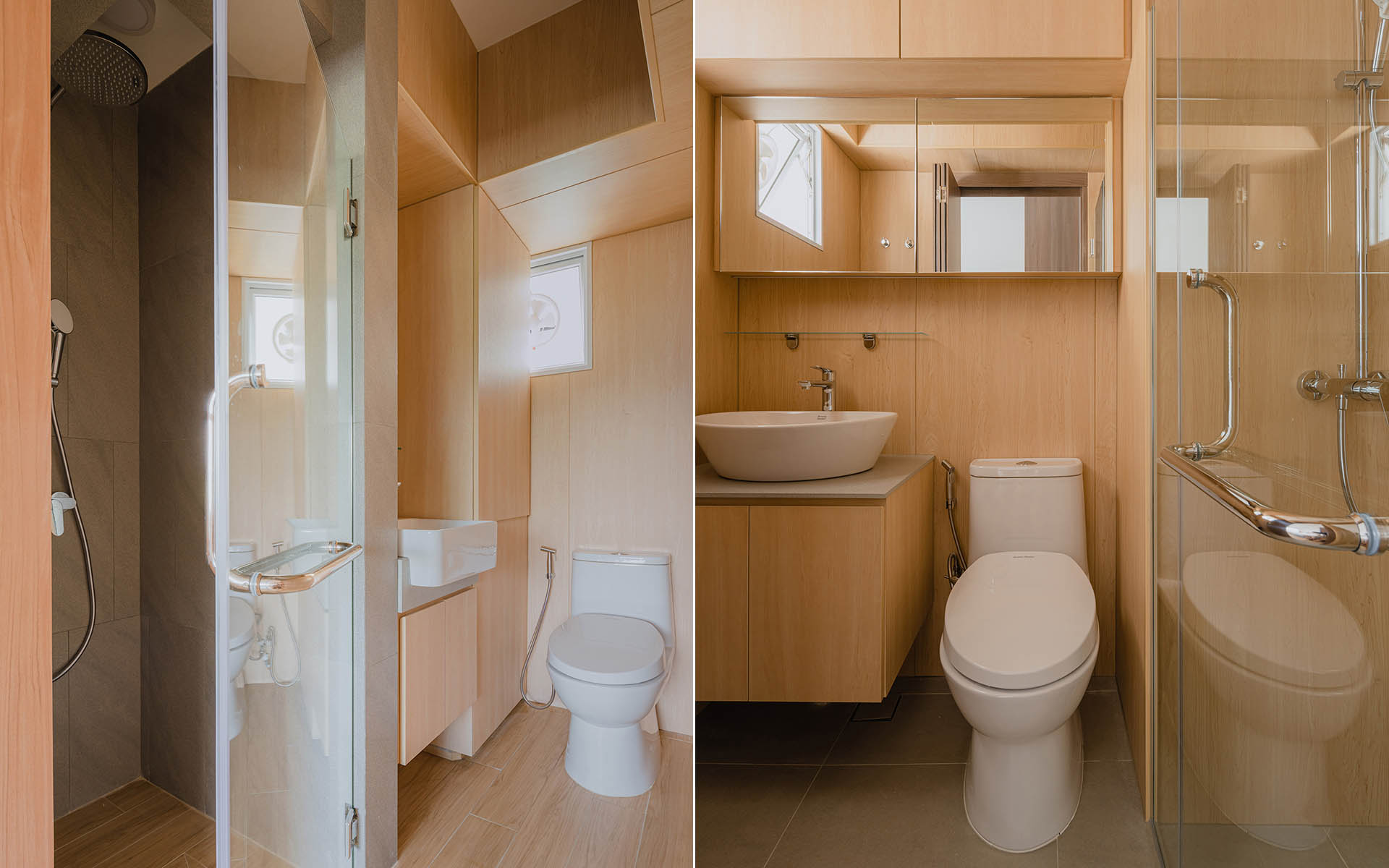 The layout in both bathrooms had to be reconfigured in order to segregate the shower cubicle from the rest of the bathroom. To keep bulky water pipes out of sight, pseudo cabinets were constructed which hides the pipes while making them readily accessible.