If you can’t go to the Bali, bring the Bali resort to you. That’s what a newlywed couple did when they gave their five-room resale flat a complete overhaul.

Inspired by tropical resorts not unlike Balinese villas (oh, how we’ve missed those), the homeowners of this Pasir Ris apartment “really wanted warm wood tones and concrete or stone elements to give the home a rustic yet cosy touch,” Phelix Loh of Comfort Home Interior tells 8Days.sg. He’s the interior designer tasked with turning their dream home into reality.

“The unit was relatively old, but the foundation was very sturdy,” says Phelix of the 33-year-old flat. “Most of the house was in its original condition, and the previous owners did not alter much of the layout or did any major renovation works to it.”

After three-and-a-half months of renovation and a $80,000 budget, the space is now awash in earthy and warm tones and textures of nature, and oozes charming resort vibes. One look at the flat’s spacious, light-filled entryway and you may think this was a jumbo flat. But this 1,400 sq ft unit is actually a five-room corner unit - the owners had purchased the access balcony corridor for extra space. The access corridor wall was hacked down to allow natural light into the entrance walkway that opens up to part of the kitchen.

Two double-panelled glass doors that flank a rustic feature wall at the end of the walkway ensure that natural can stream into the main living space of the apartment. 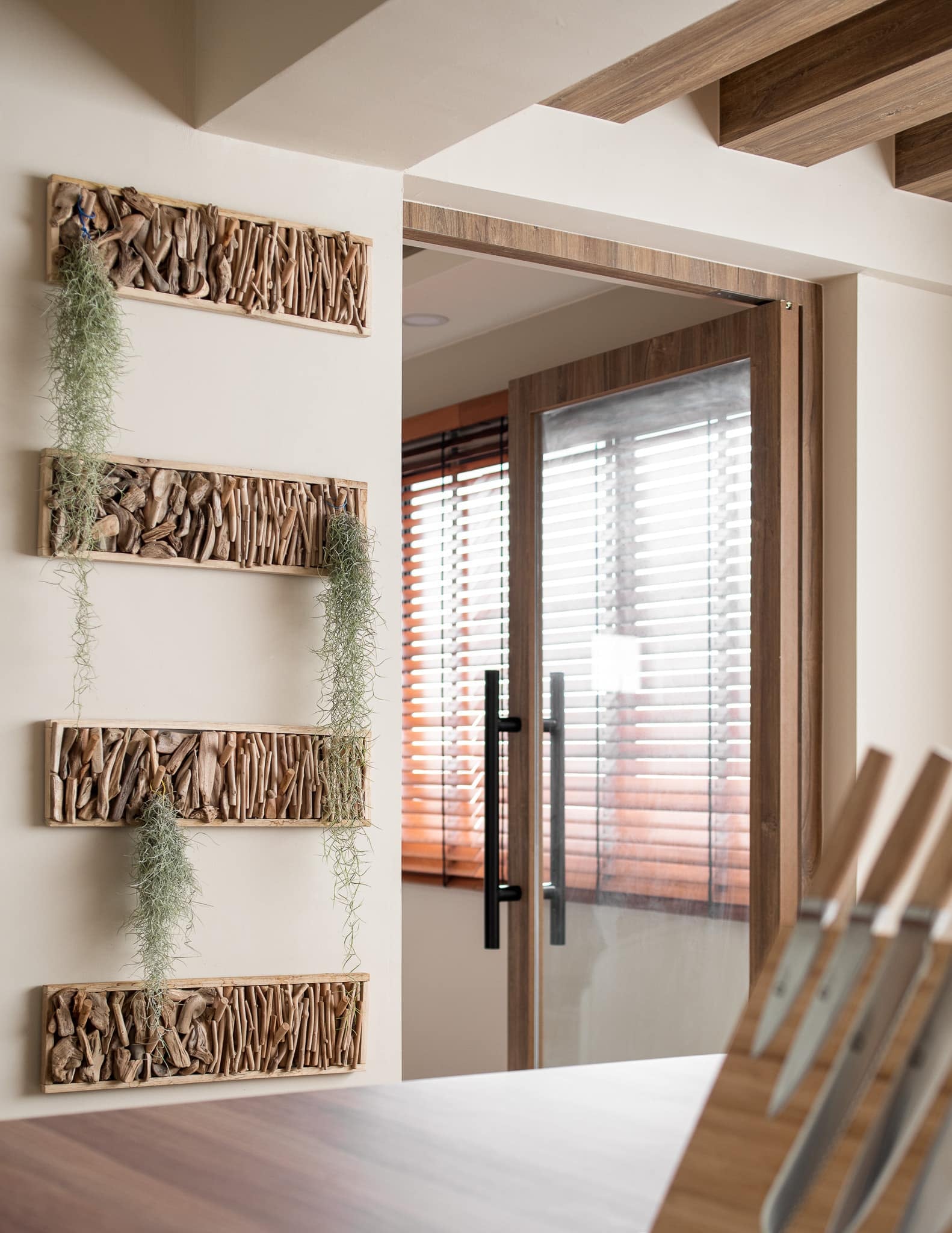 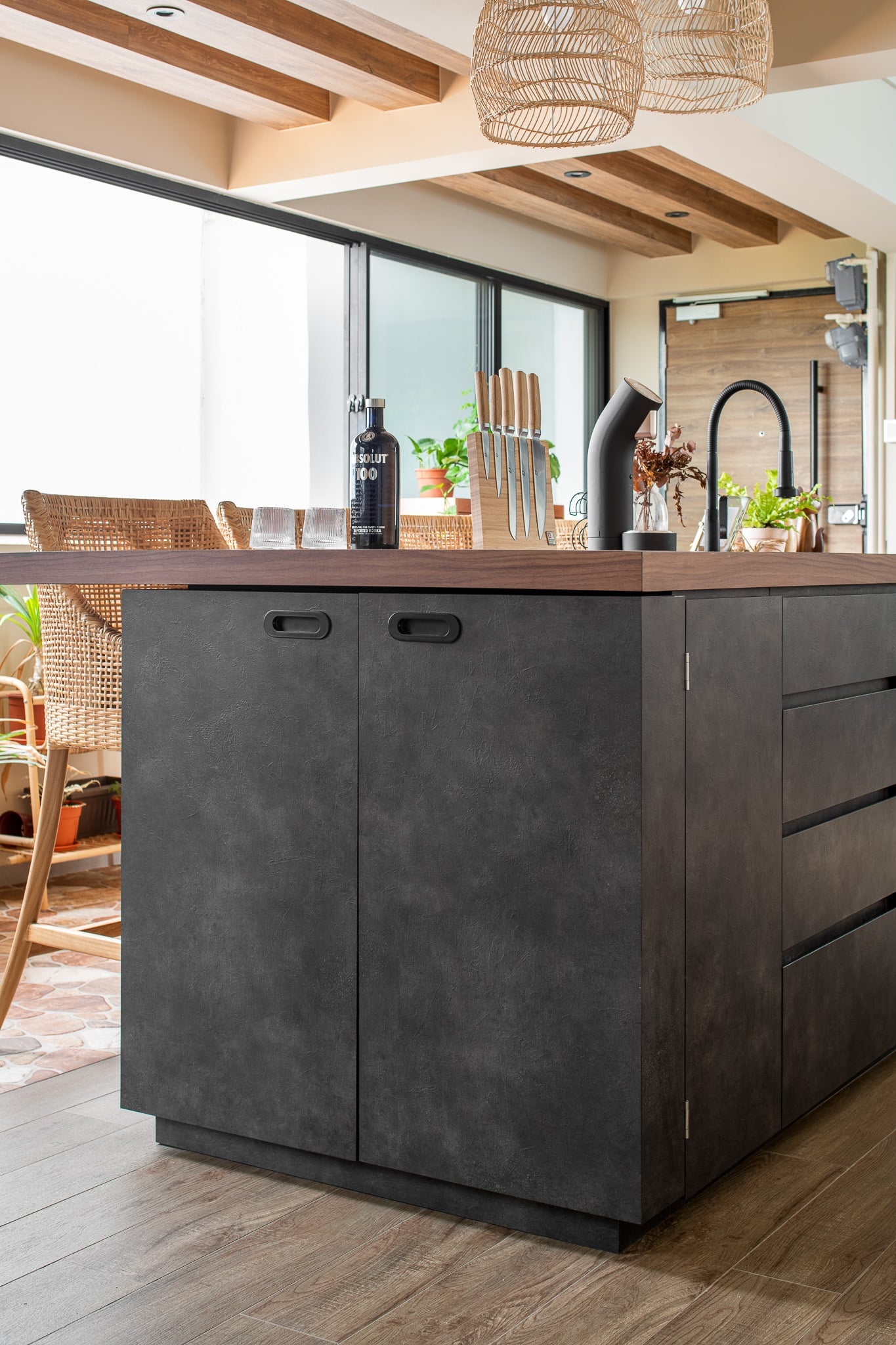 Next to the entrance of the home, the massive kitchen island — it spans 2.5m by 1.2m — is among the highlights of the space. It's multi-functional — not only is it a bar counter with seating space, but it’s also the main storage and workspace in the kitchen. It accommodates a sink, water dispenser, and induction hob and even a fab hidden bar. 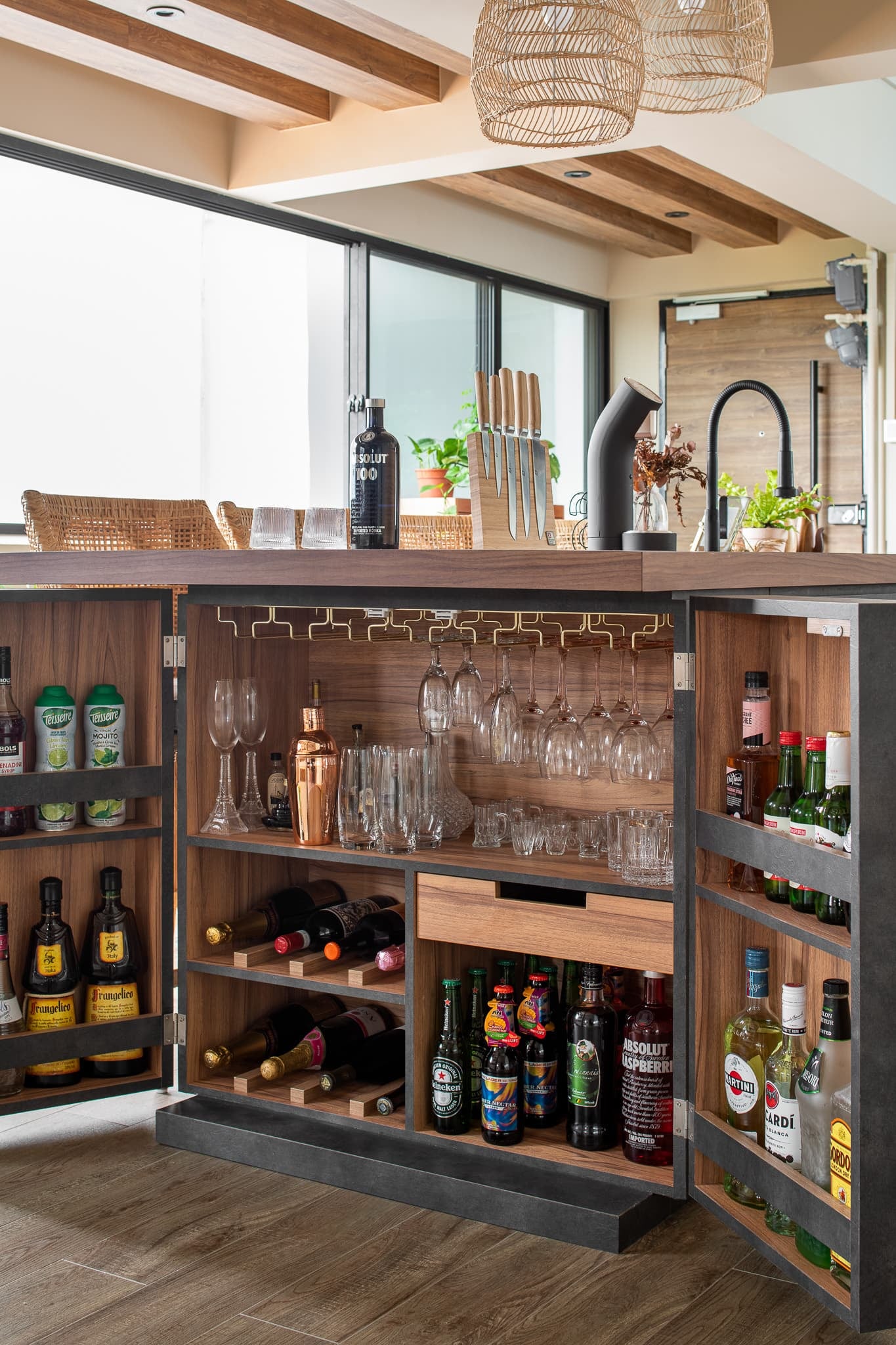 One of the features that the homeowners had specifically requested for, this hidden bar area acts as a transition between the kitchen, living and dining spaces. 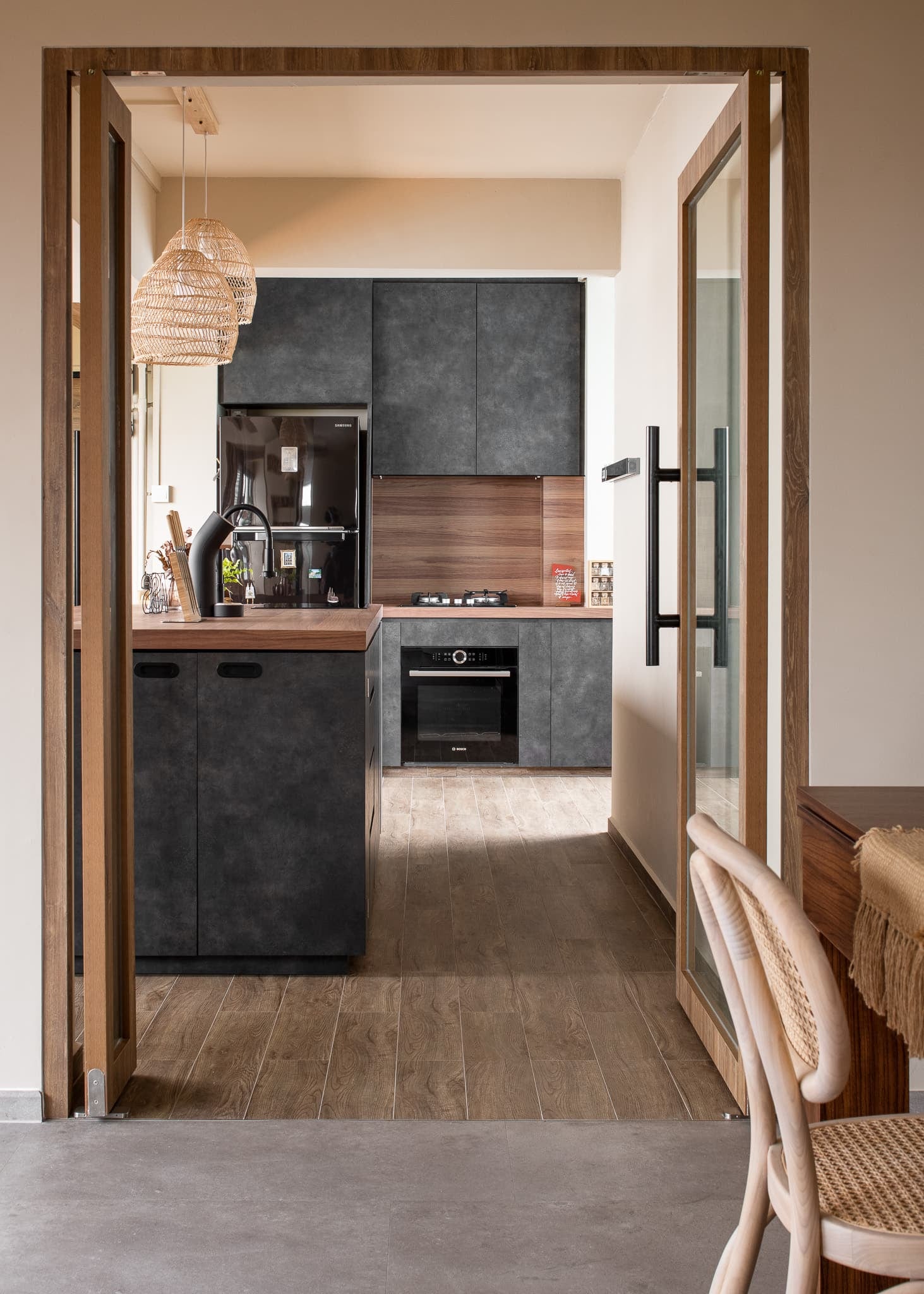 While the induction hob on the kitchen island is used for light cooking, heavy cooking — and baking — is done at this separate nook in the kitchen. 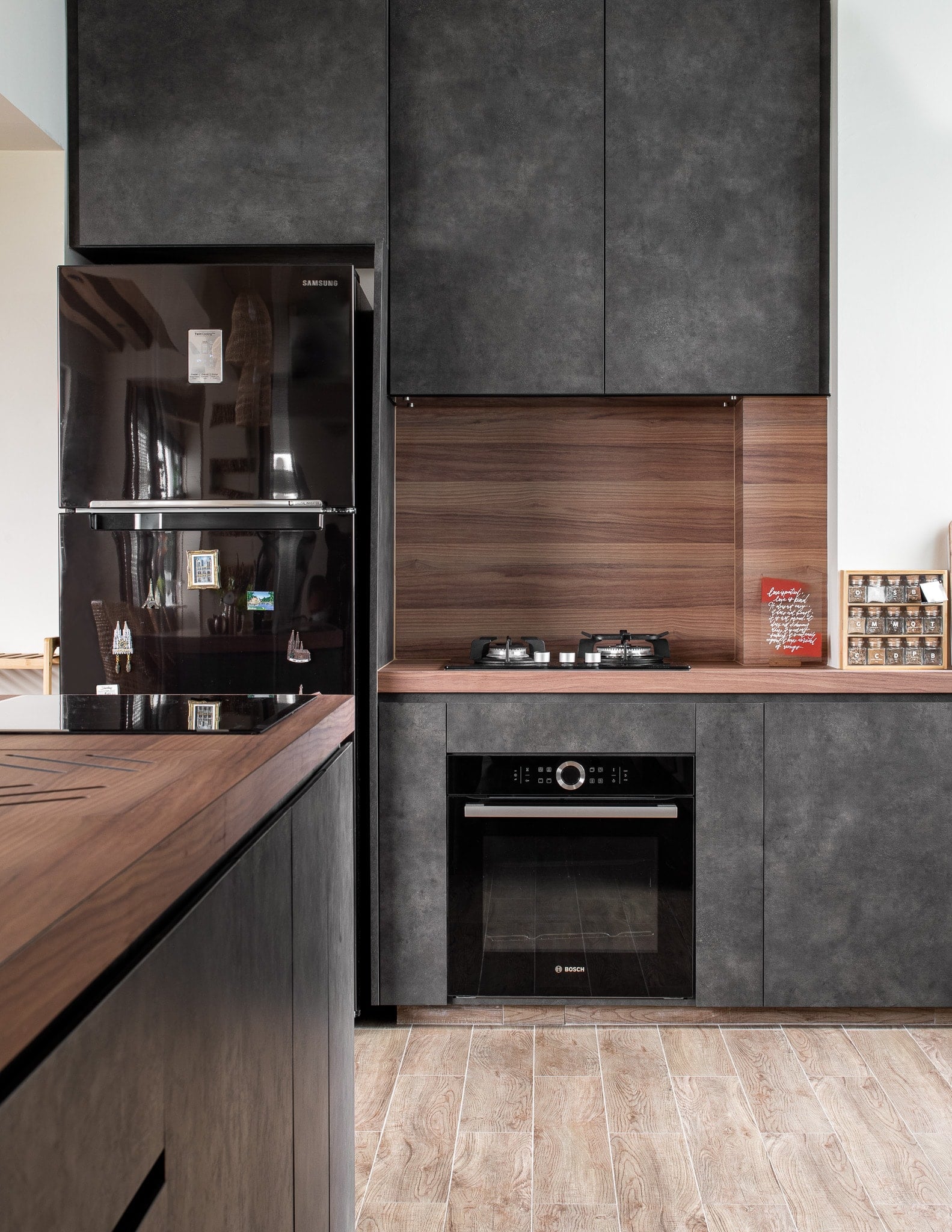 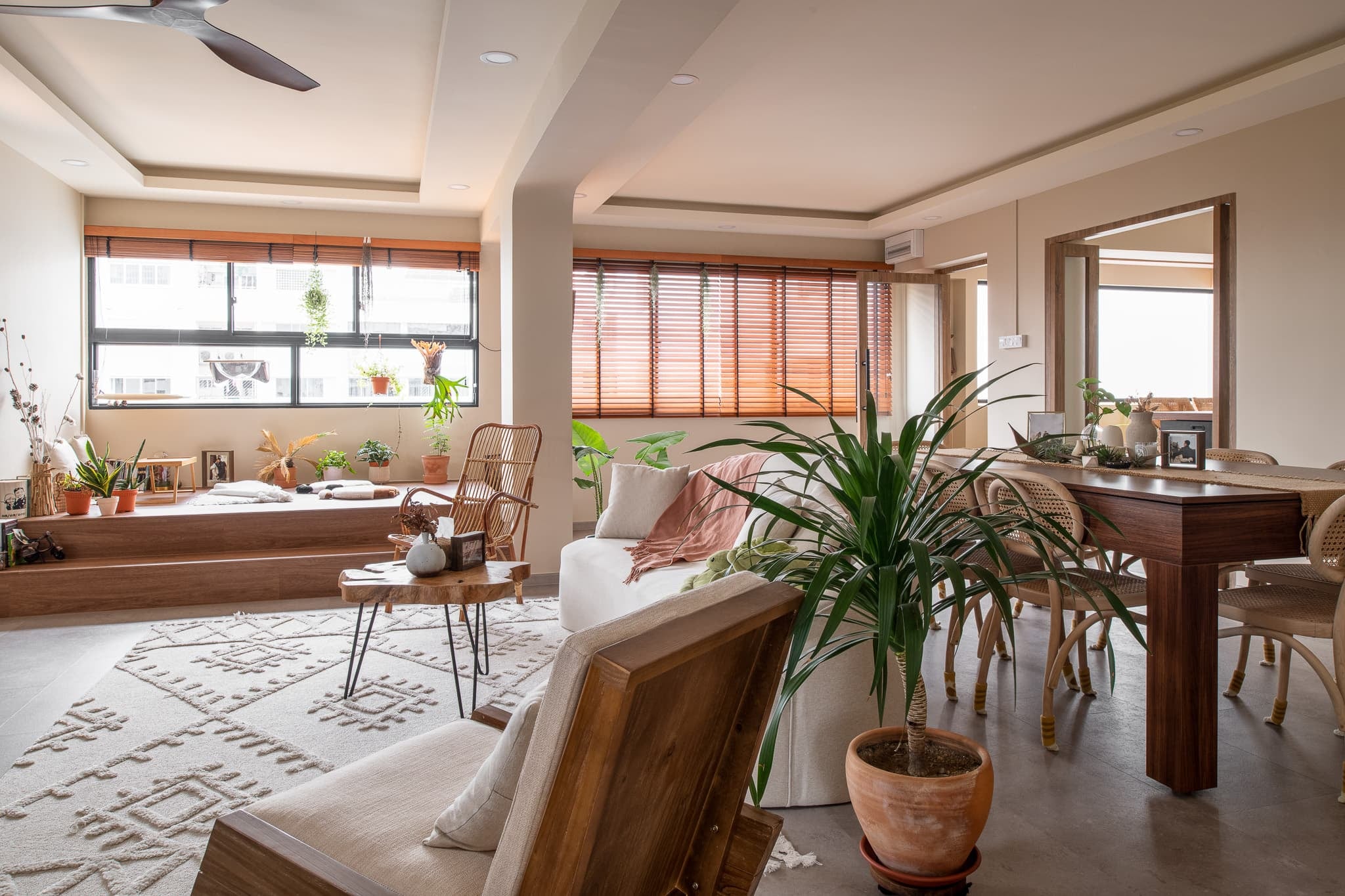 “The space was originally quite spacious to begin with,” says Phelix of the open-plan living and dining areas.

“But there used to be a small study or bedroom in the corner of the living room, and we hacked that down to make space for a storage platform corner to give the living and dining space a more rectangular and proportionate look.” 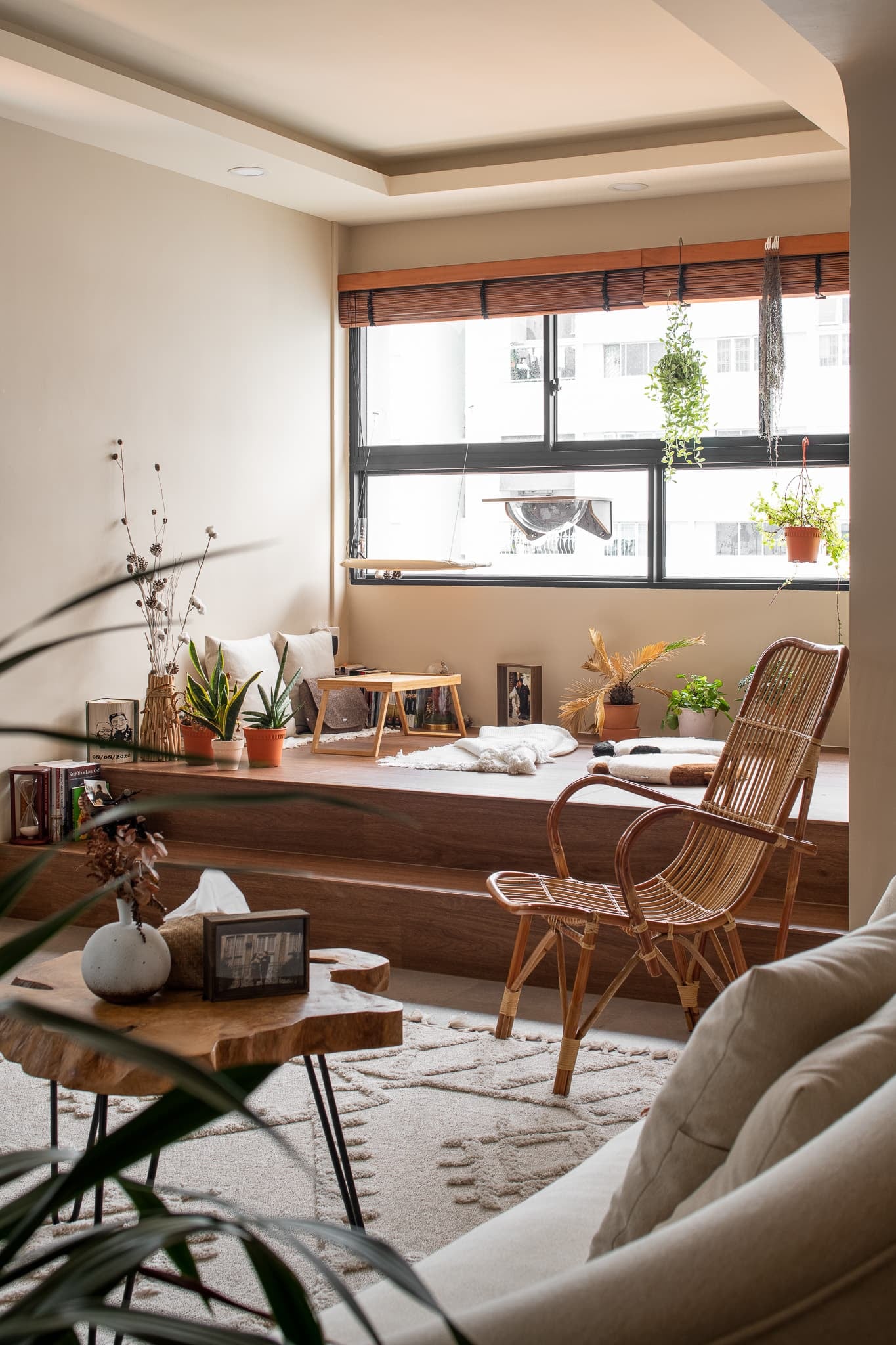 “Our clients made sure that the communal space was multi-functional,” he adds. 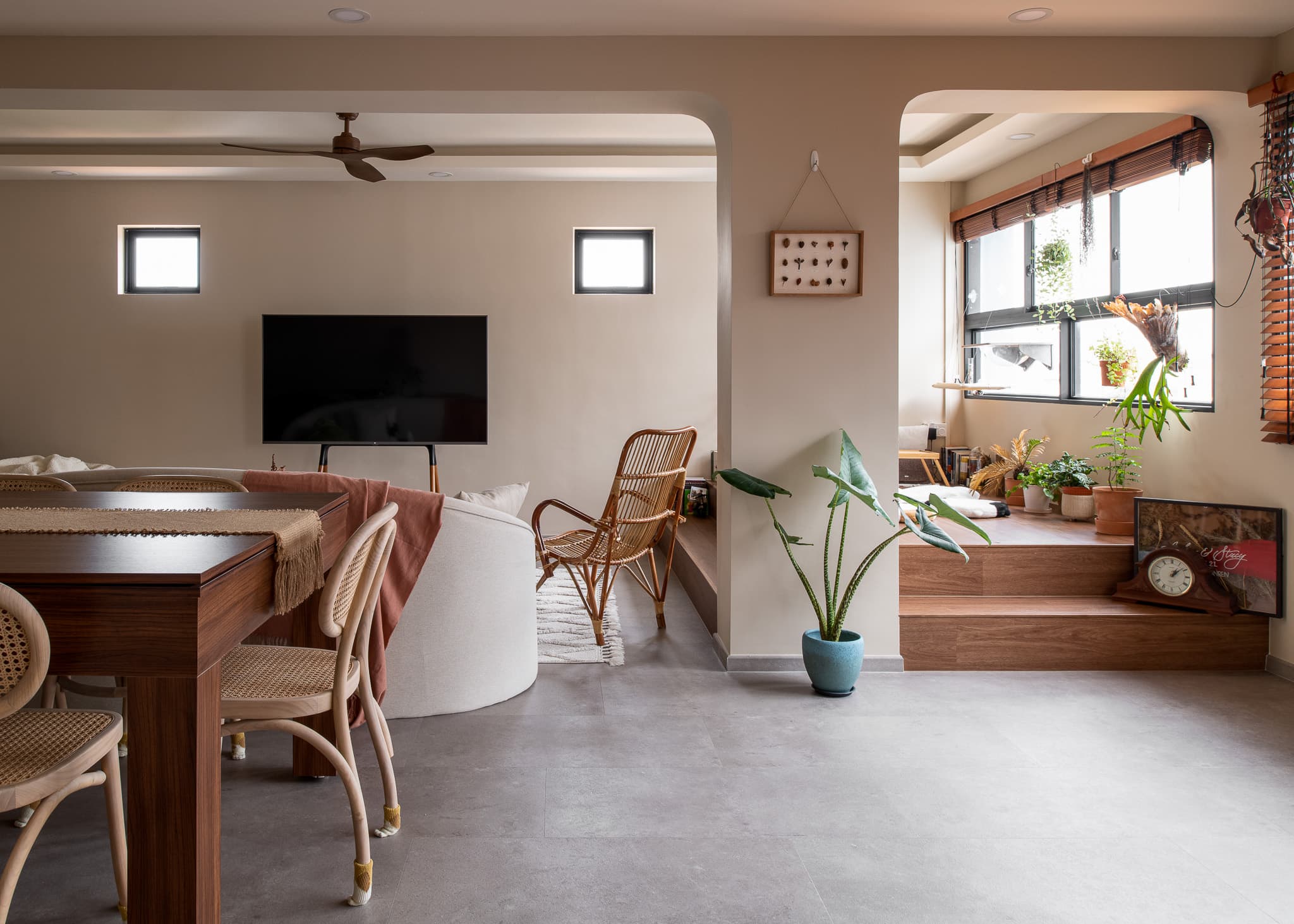 To that end, even the dining table pulls double duty… as a hidden pool table. That, coupled with the hidden bar conveniently perched next to it, must take centrestage at many a home gathering we reckon. 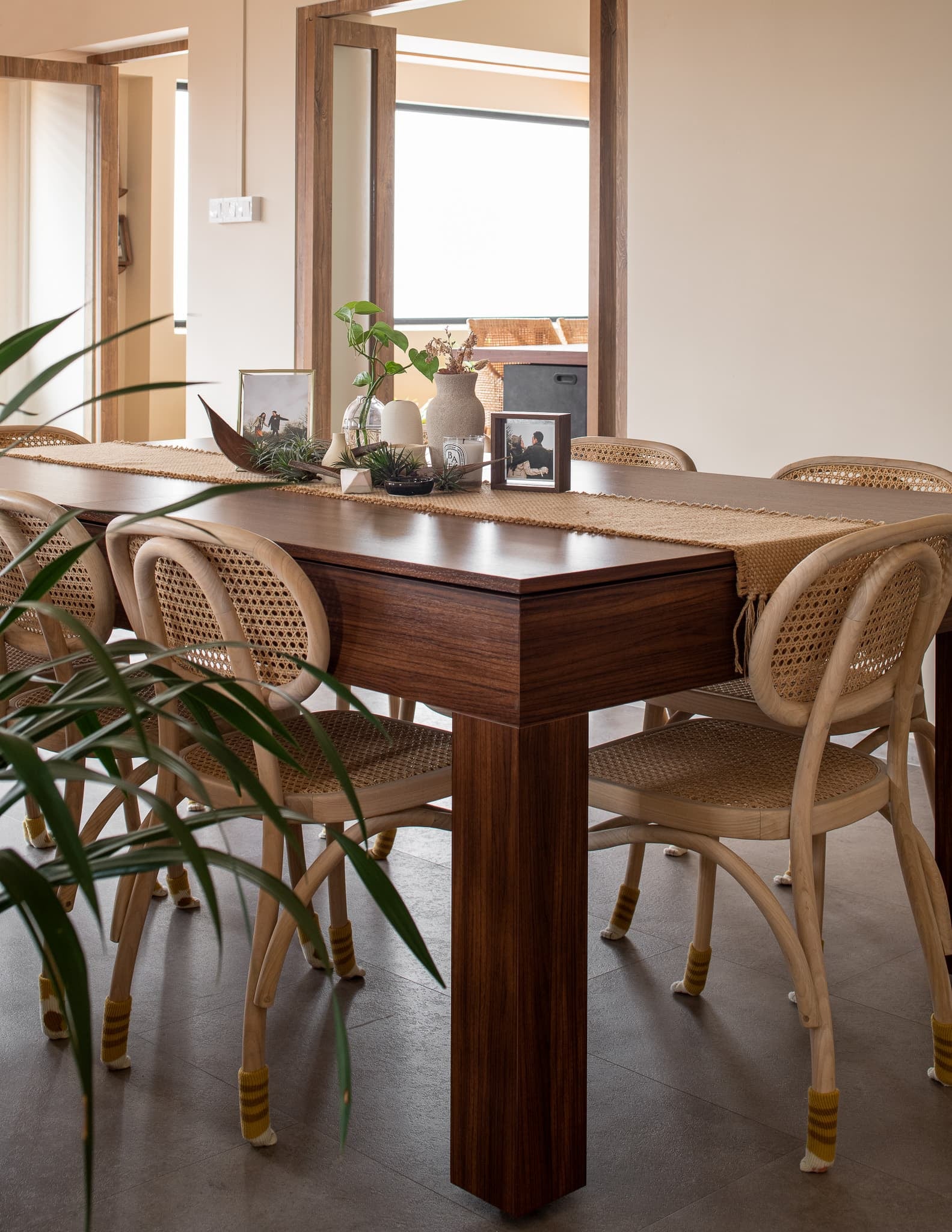 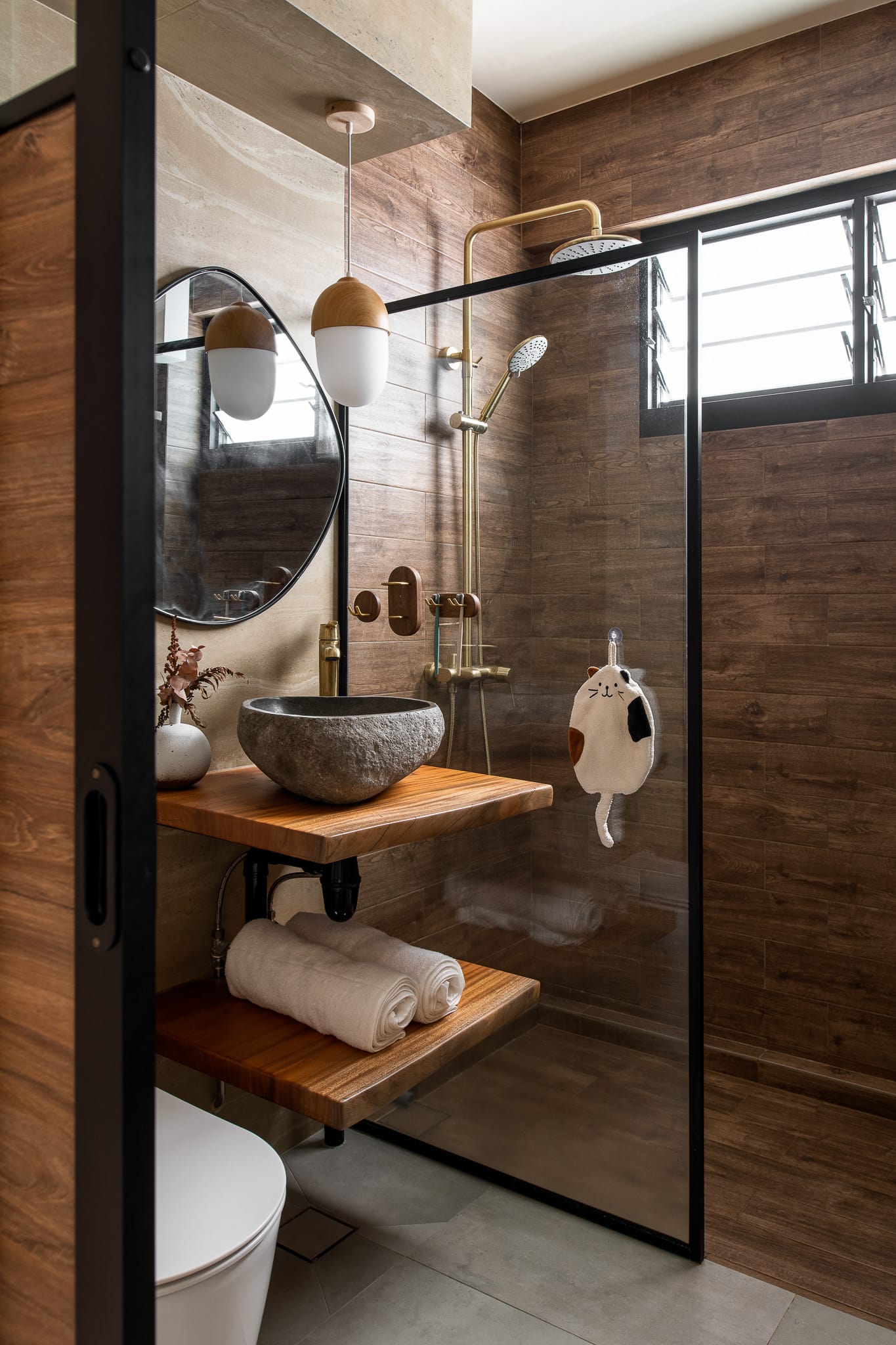 The design aesthetic of the apartment follows through even in both bathrooms.

Wood and stone textured tiles were mostly used, and these are accentuated by gold sanitary ware and wooden slab vanity counters “to give a more authentic experience to the concept”, he elaborates. 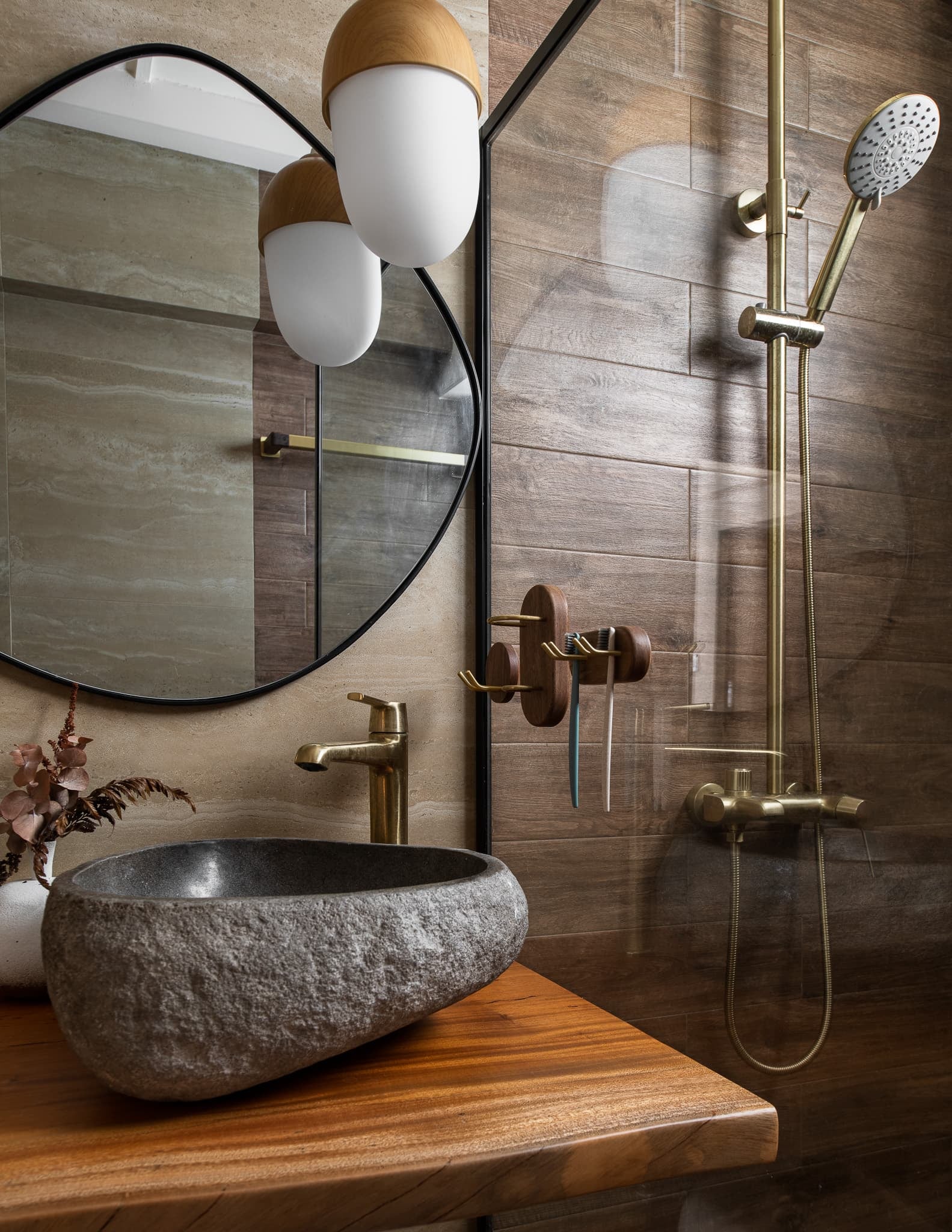 In fact, the homeowners went so far as to source for actual stone basins that were one of a kind. 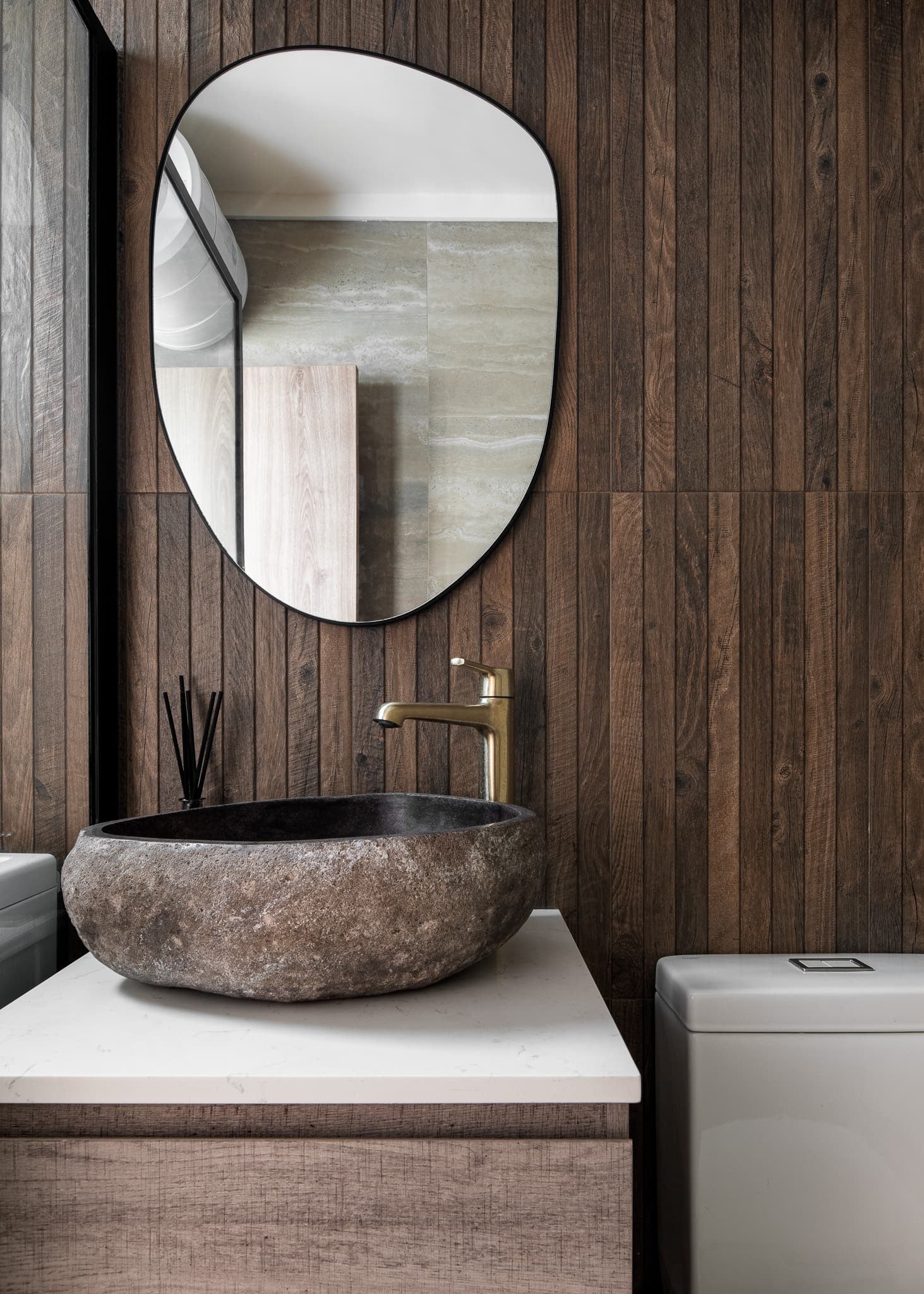 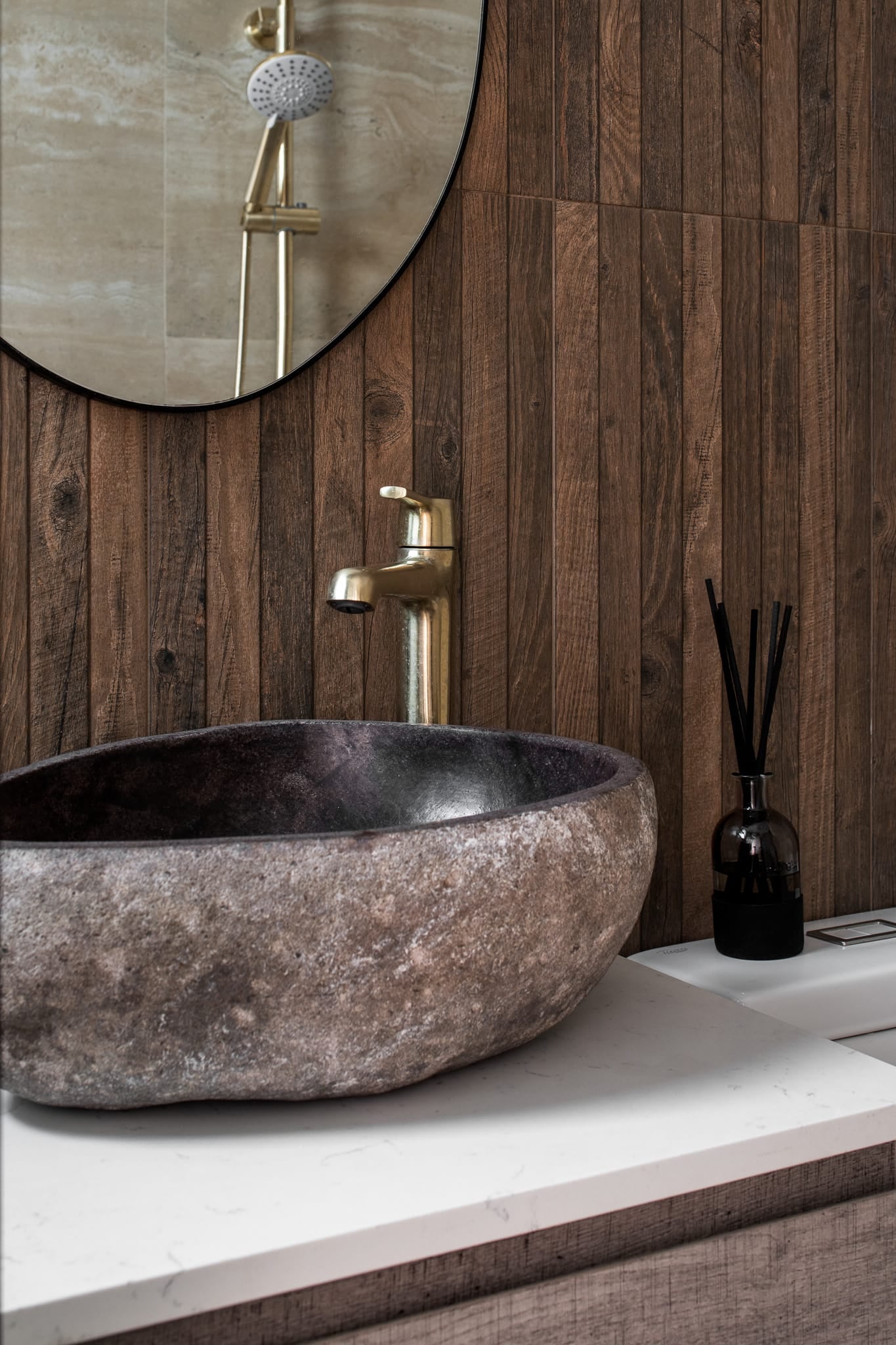 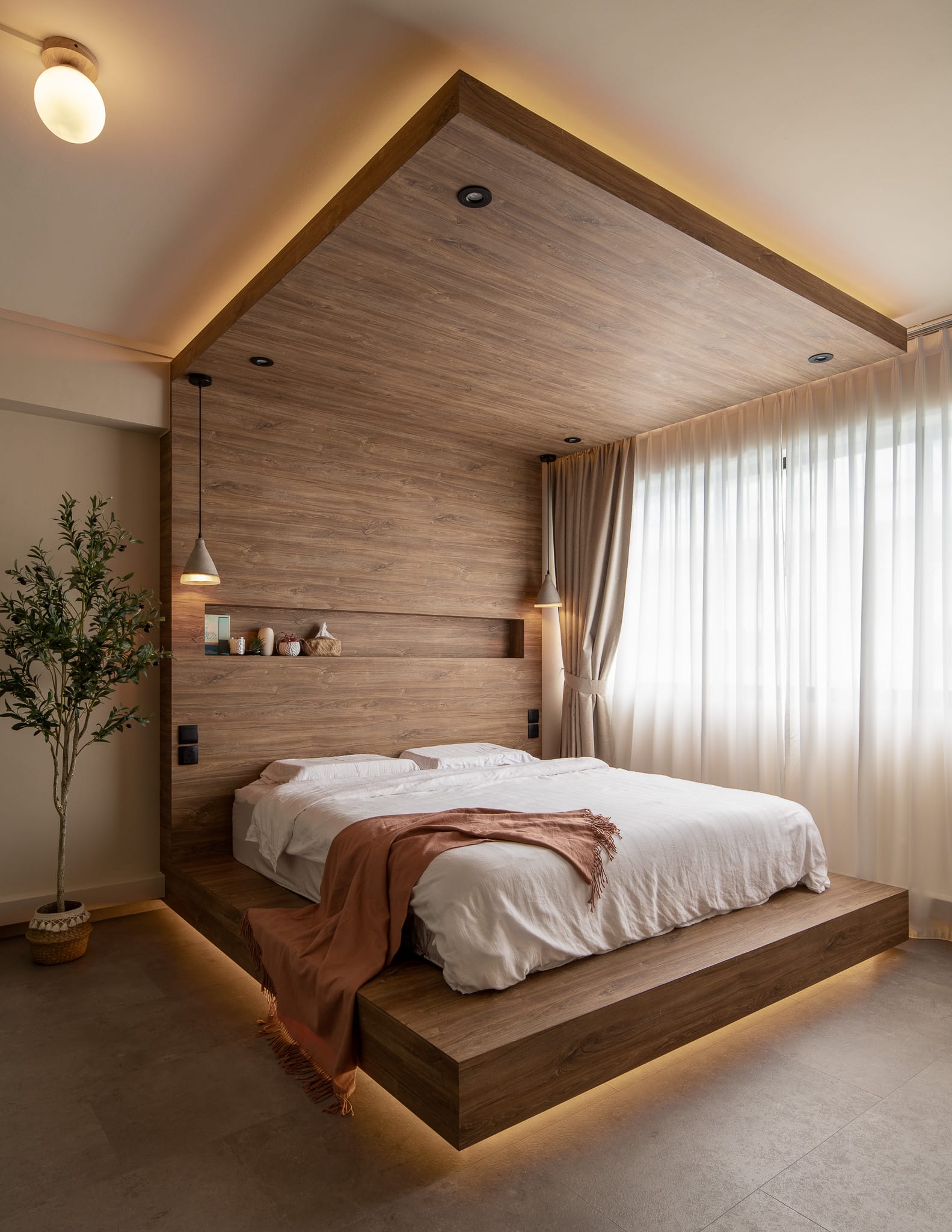 Neutral and earthy tones, sleek lines, a wooden panelled floating platform bed and soft cove lighting - basically everything you need for a soothing sanctuary to unwind in after a hard day’s work.

No side tables, no matter. A niche is carved out in the headboard with just enough space for the homeowners’ bedside trinkets. 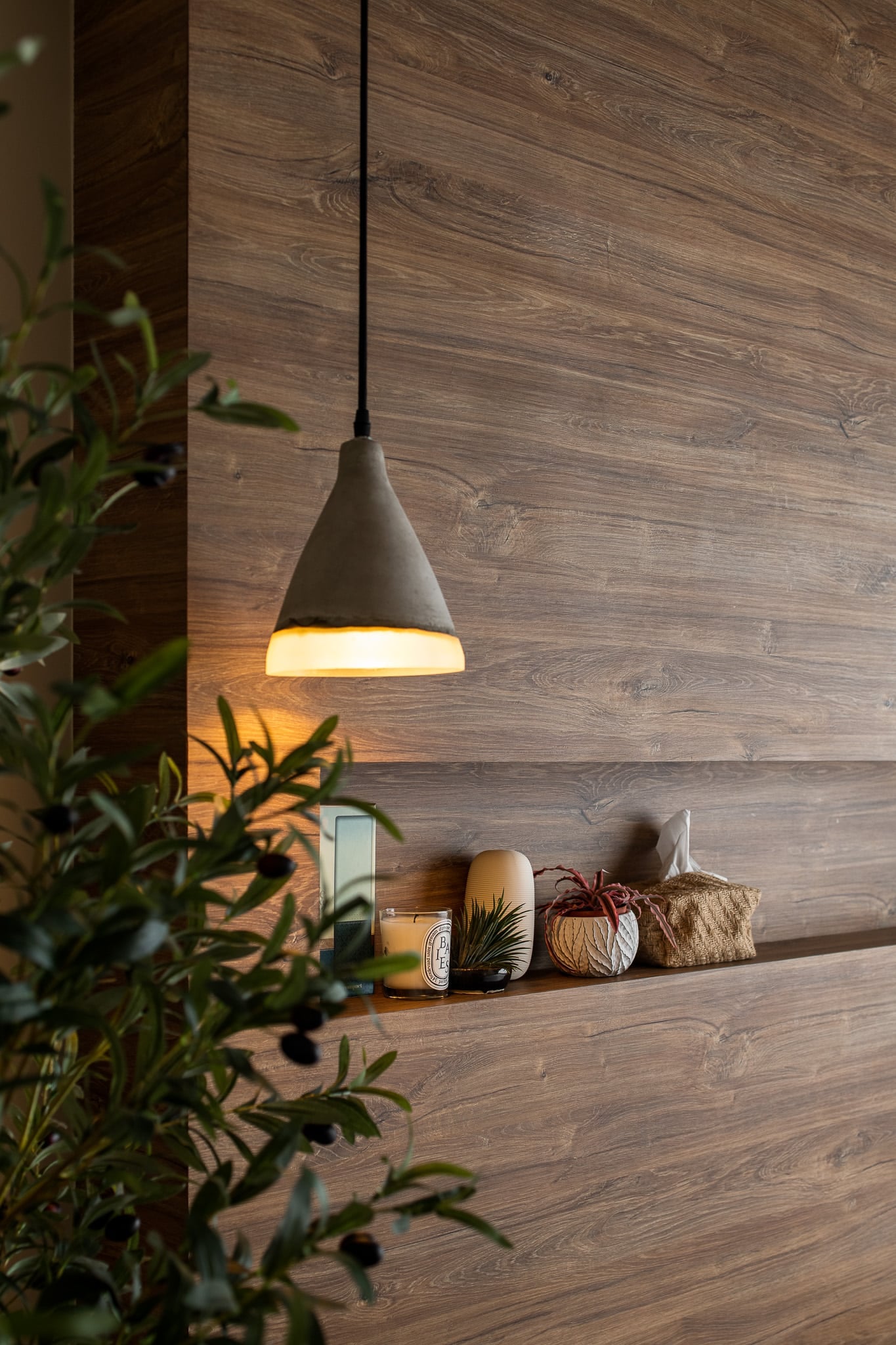 The main bedroom was expanded by relocating the store room to a more discreet location. 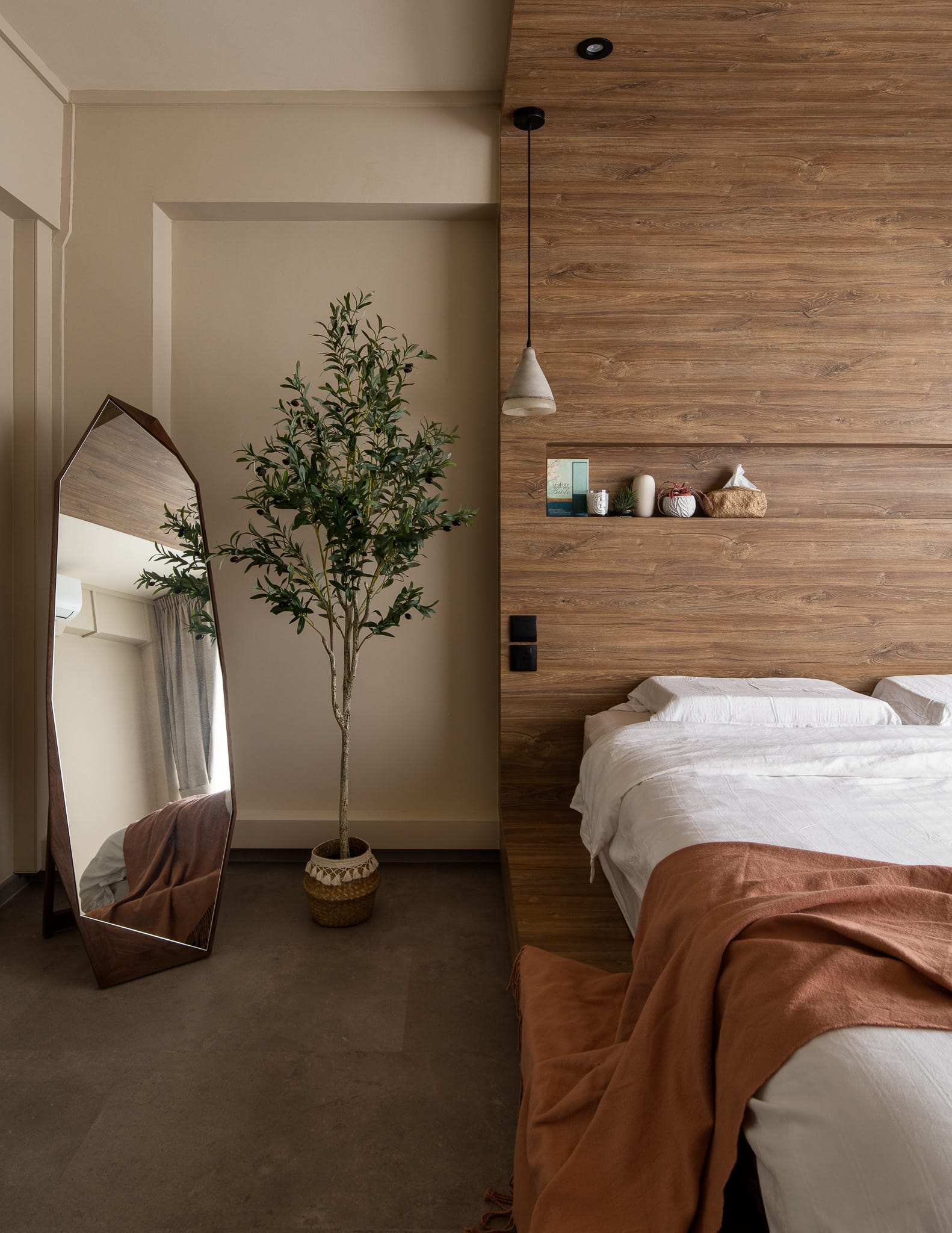 An open walk-in wardrobe was carved out, providing ample space for the couples’ clothes and accessories. 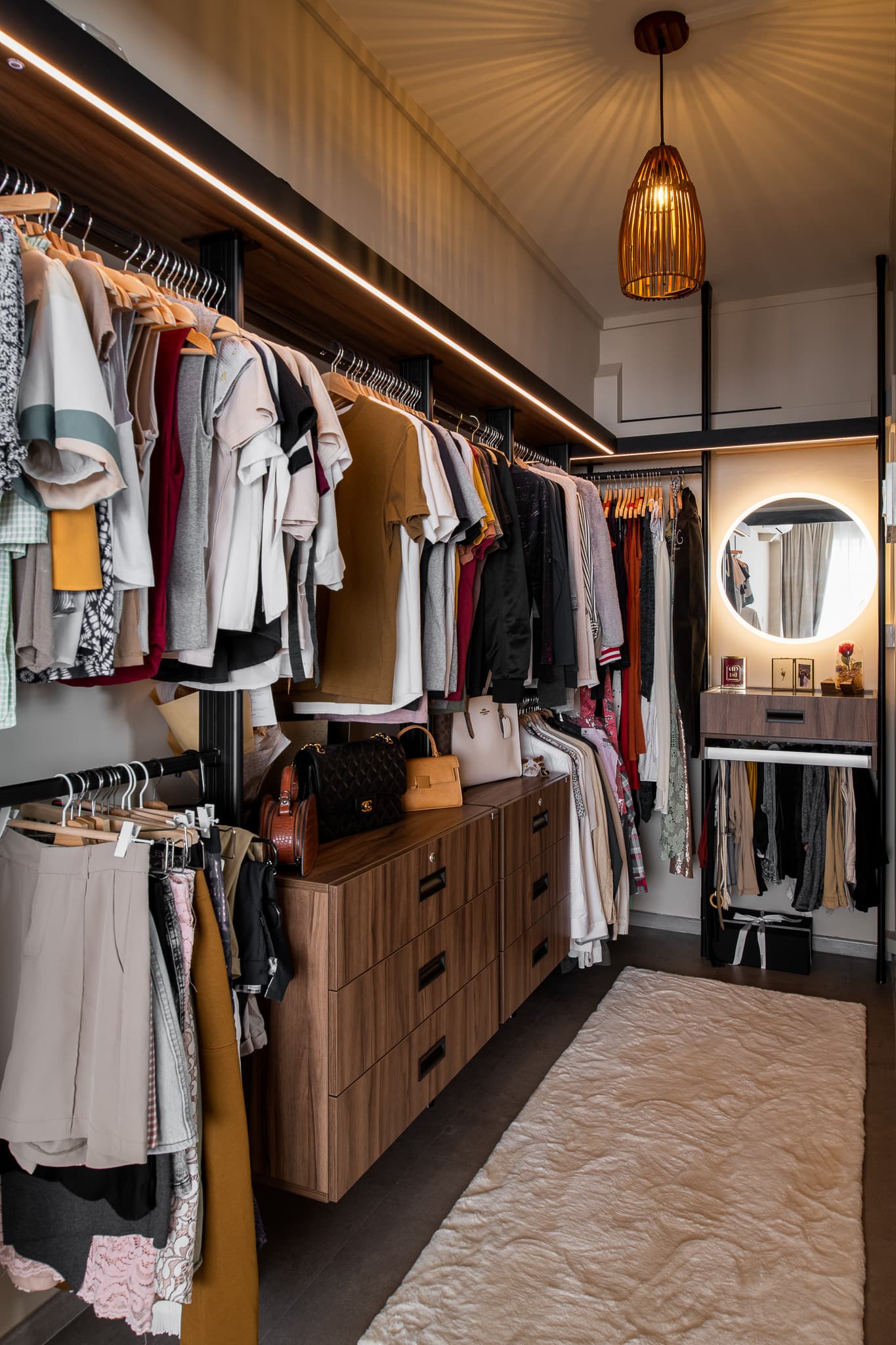 This calming abode may be picture-perfect now, but the reno journey was not without some hiccups, Phelix recalls. The gas and water meters were meant to be relocated to the exterior of the apartment, but there were to many processes to go through. 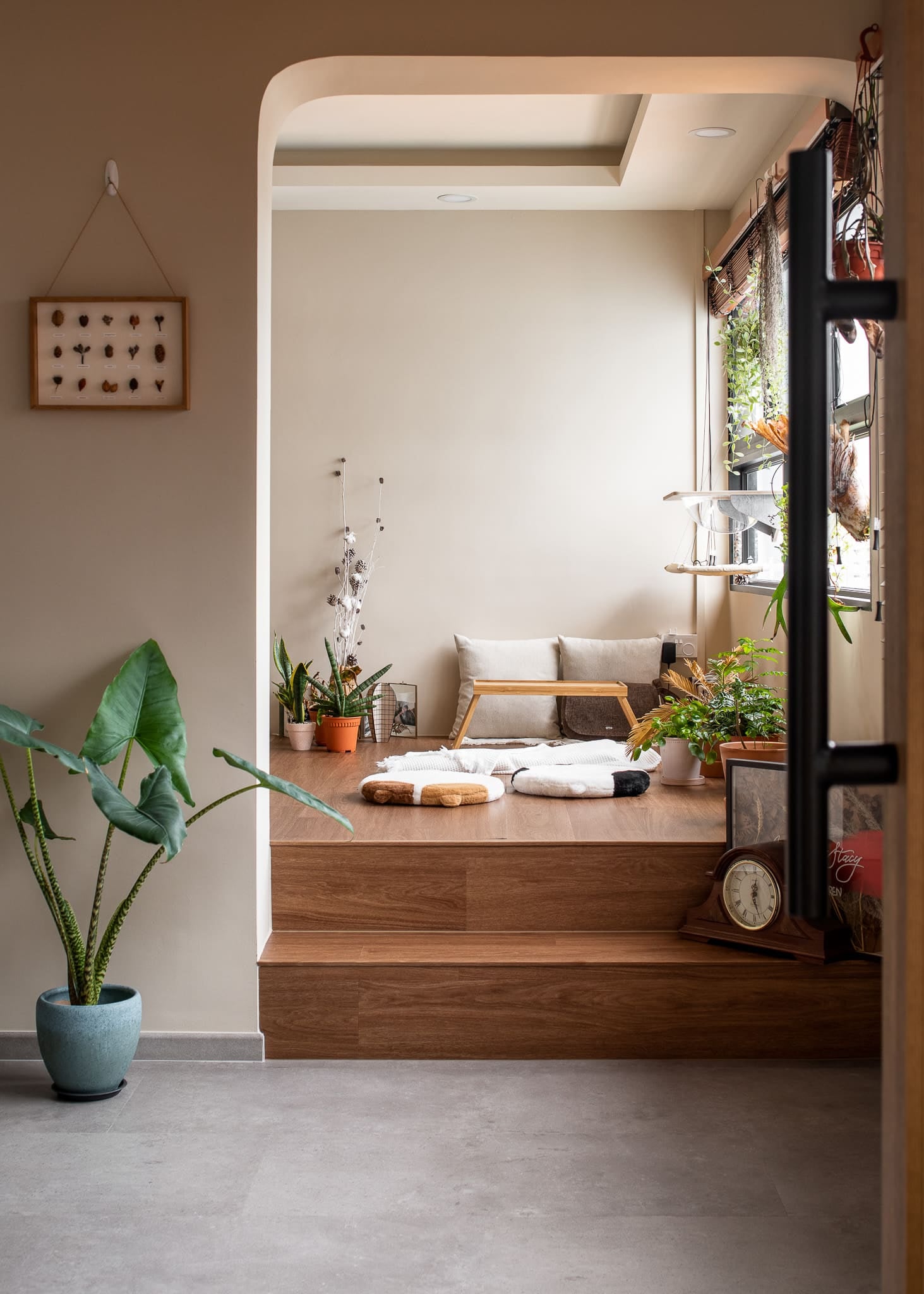 “It was not worth the trouble and we decided to focus on the rest of the house instead to work on what we can,” he recounts. “We also went into the renovation during the Covid-19 period, so a lot of the works had to be pre-planned properly so that we could keep to schedule without any delays.”