It's exciting times ahead for the 61-year-old actress.

Yesterday (Sep 27), it was announced that the 61-year-old actress has been nominated for the award for her role in local film Ajoomma, where she plays a Singaporean widow who rediscovers herself during a solo trip to South Korea.

The awards ceremony will be held at the National Dr Sun Yet-sen Memorial Hall in Taipei on Nov 19.

When 8days.sg spoke to Huifang the morning after the announcement, her excitement was still very much palpable over the phone.

"Thank you everyone for their support and encouragement," she gushed, adding that she's feeling immensely grateful for the many congratulatory messages from her friends.

8DAYS.SG: Congratulations! How did you feel when you first found out about your nomination?

HUIFANG: I was so moved and excited that everything was a blank (laughs). The feeling was really like I was floating in the air (laughs).

Where were you when the announcement was made?

I was doing an interview at a restaurant with [the film's director He Shuming], and the place was empty 'cos it was their day off. Halfway through, my director said to watch the live stream because the nominations are being announced, so we just sat in front of the computer. And that feeling… Let me tell you, time was passing so slowly and it felt like my heart was going to drop. (laughs)

When we heard the news, my director and I hugged each other and said “We did it! We did it!”

Was the nomination something you were expecting?

I really wished that I would be nominated but I wasn’t expecting it because there were so many good projects. From what I know, there were 60 films competing, which means there are 60 female leads [fighting for the award]. So to be able to make it to the Top Five really wasn’t easy.

How did you celebrate this major achievement?

I haven’t had the time to celebrate because I’m still filming [Mediacorp drama Strike Gold]. And next week I’m flying to Busan for the 27th Busan International Film Festival. I'll be there from the 5th to 11th for the red carpet event and three days of screenings [for Ajoomma]. Then I have to fly back to resume filming. I've been really busy lately.

So maybe after my Busan trip and before the Golden Horse Awards, I’ll celebrate with some close friends and my family?

What did your husband Zheng Geping and kids, Tay Ying and Calvert Tay, say about your nomination?

They are very happy. [My kids] told me they are proud of their mummy and I’m very touched by that (laughs). When I got home yesterday we even chatted till about 2, 3am.

Will your family be joining you at the awards ceremony?

I did discuss this with my family but it all depends on the timing. They really want to go. My husband says if I’m going he’d most probably go too. As for my kids, they’ll have to look at their schedules ‘cos they are working too. 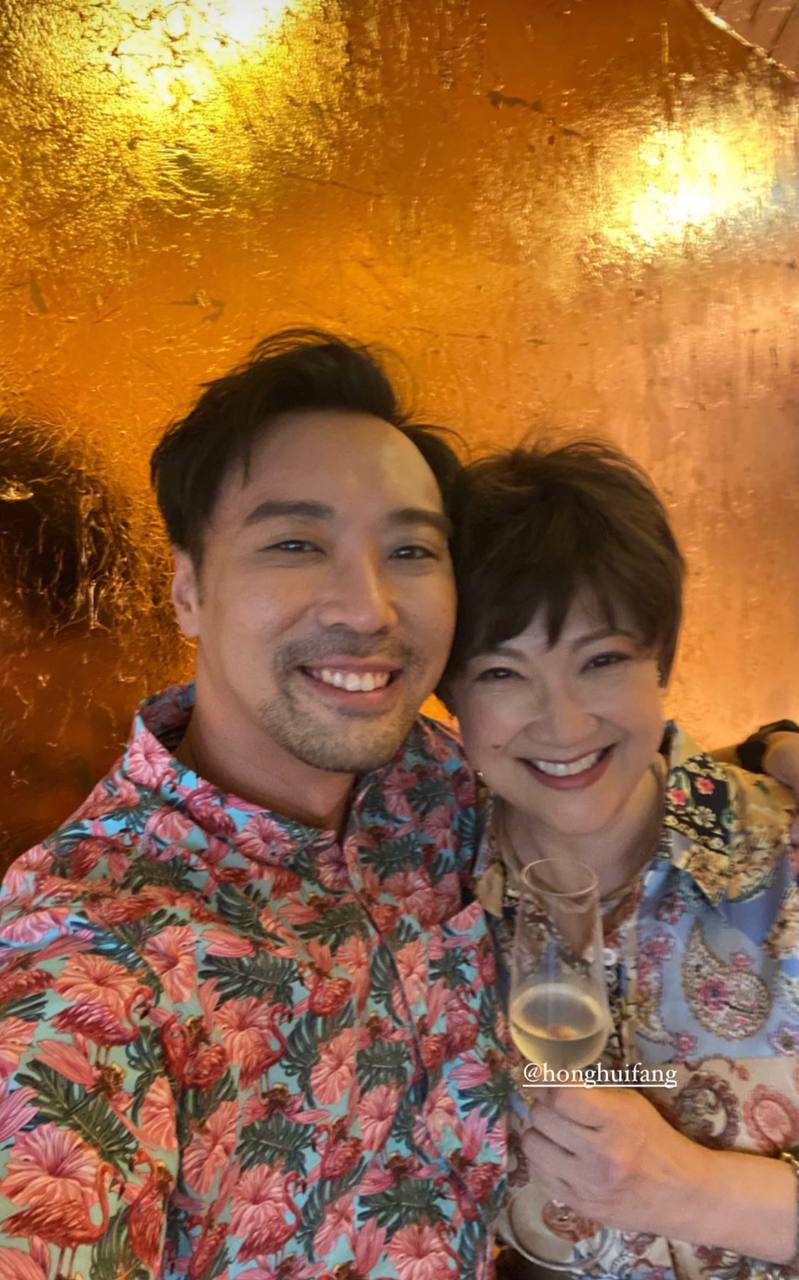 Huifang and director He Shuming

Are you confident about winning?

I’m taking it easy. I'm very contented about being nominated already. Whether or not I win, really depends on whether we're at the right time and place. All the contenders are really talented so whoever wins just means that it's the right time for them.

Mark Lee was nominated for Best Actor at the Golden Horse Awards in 2020, did you ask him for any advice on what to expect?

Oh, I spoke to his wife Cat yesterday. I was having dinner with Yvonne Lim and she joined us. I asked her how things were and she gave me some tips, like the flow of events and how many outfits I should prepare. She told me to prepare at least two outfits but we didn't really discuss too much about it. For now my daughter will help plan my outfit, but it’s still too early so we haven’t decided on the style and haven’t really gone into the details yet.

I was like "Okay, at least I have some idea of what is it about and what is going to happen" because I really don't know what to expect (laughs).

Do you plan to increase your asking fee now that you're officially a Golden Horse nominee?

Won't lah. At this age we won't take on roles based on the asking fee, it doesn't matter. What's most important is the plot and whether or not I can perform the roles well.