“I didn’t want anything too sexy 'cos of my age,” added the Best Actress nominee, who looked like a million bucks in her custom gown and Charles and Keith heels.

Hong Huifang flew the Singapore flag high when she graced the red carpet of the Golden Horse Awards today (Nov 19) in an (almost) entirely Singapore-designed get-up.

The Mediacorp star, who’s nominated for Best Actress for her role in Ajoomma, was the picture of elegance when she sauntered in dressed in a regal white gown.

At first glance, the outfit looked unassuming and safe, but was, in reality, anything but.

A custom design from Michelle HuiMin Bridal Veil, the gown features puff sleeves and a trail of crystals down the front. The highlight is the striking red floral embroidery cascading down the back and train.

To allow the statement back of her gown to take centre stage, Huifang, 61, wore her hair in an updo and finished the look with a pair of sparkly heels from homegrown label Charles and Keith.

The only missing piece in the all-Singapore puzzle is her jewellery (more on that later), which is from Boucheron. While Huifang didn’t intend to don national colours, she felt it would be nice to represent local designers on the red carpet.

“I wanted to wear a custom gown by a local designer, so I approached Michelle to style me and design something for me. It’s meaningful too ‘cos Michelle designed my wedding gown [30 years ago],” she told 8days.sg. Huifang’s daughter Tay Ying was her stylist for the Busan International Film Festival and Singapore gala premiere for Ajoomma. 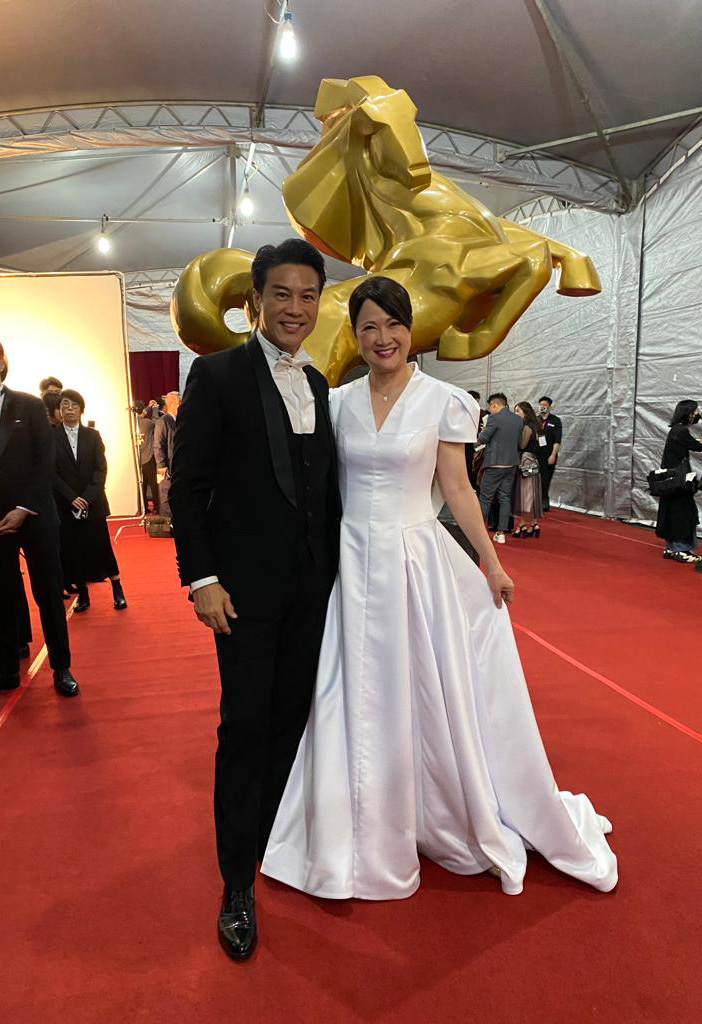 Having worked with Michelle HuiMin several times for the Star Awards, Huifang gave the designer free rein when it came to designing her gown. Her request? It has to be simple and not too revealing.

“I wanted something with a bit of sleeves, and it should not show too much of my cleavage and back. I didn’t want anything too sexy 'cos of my age. I think people won’t be able to accept it,” she laughed. All eyes on her back

According to Huifang, the embroidery is inspired by orchids and the frock took six weeks to complete.

Huifang was drawn to the understated yet glamorous design (it’s even got pockets!) as well as the unexpected embroidery detail that takes it to a whole nother level.

Don’t worry that it won’t get enough screen time, “If I win, everyone will be able to see the details when I make my way up onto the stage,” quipped Huifang.

While she admitted that it would have been nice to complete the look with bling from a Singapore label, the S$750K earrings Michelle HuiMin had picked for her from jeweller Daughters of the Earth were “too expensive” and she “didn’t dare to bring them over [herself]”.

“It’s too risky to travel here with them. What if I lose them?” she said.