Quan Yifeng To Take Social Media Break Due To A “Slight Illness”, Says She Might Look A Little Swollen In Hear U Out 3

The host has since edited her caption to remove any mention of her health, but will still be taking a break.

Mediacorp host Quan Yifeng, 48, shared a selfie on her Instagram today (Aug 4), revealing that filming has wrapped for the third season of her hit talk show Hear U Out.

In her caption, Yifeng also announced that she’ll be taking a break from social media for the time being, to focus on her health.

A few hours after her initial post, the host edited her caption. 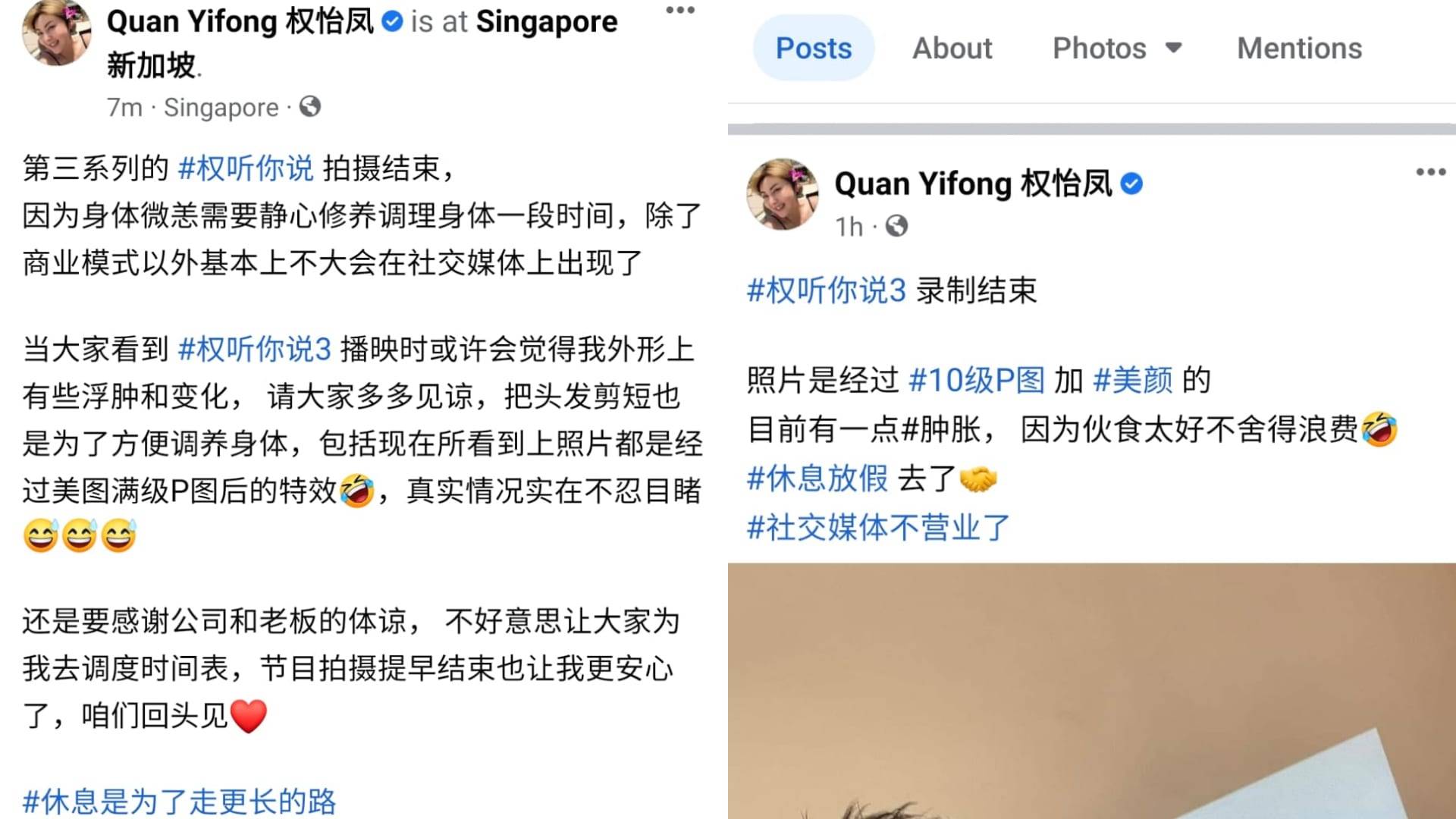 Yifeng's original caption is on the left, while the new caption's on the right.

"The third season of Hear U Out has finished filming. Due to a slight illness, I’ll need a little quiet time to recuperate and look after my own health. Apart from commercial engagements, I basically won’t appear much on social media.

When everyone watches Hear U Out 3, while it airs, you might feel that I look a little different and swollen, please be more forgiving. I cut my hair short also ‘cos it’ll be more convenient for me while recuperating. Including now, all the pictures you see have been photoshopped to the full extent. [I] really can’t bear to see what [I look like] in reality.

I would like to thank my company and bosses for their understanding. I’m sorry to everyone who had to adjust the schedules for me. [Now that] filming has wrapped early, I feel more assured, let’s meet again soon.”

In May this year, Yifeng wrote an Instagram post thanking fellow host Dasmond Koh for taking her out to eat steamboat when she was feeling sick.

The current caption on Yifeng’s post only mentions that the picture she posted had gone through “level 10 editing” on a photo editing app, and that it’s 'cos her meals are so good that she “couldn't bear to let them go to waste”.

Yifeng also mentioned that filming had wrapped, and that she would be taking a break for now. Time for some good food.

When 8world reached out to Yifeng’s manager to ask about her health, the manager shared: “She's finished filmed for Hear U Out 3, and will be going on break to rest temporarily, thank you for your concern.”

Catch the second season of Hear U Out on meWATCH here. The first episode is embedded below.

Quan Yifeng Hear U Out