That’s not the only unique way that greenery has been added in this flat.

When you think about adding greenery into the home, you’d normally think of getting some potted plants (or a lot of them), perhaps adding a green wall. But these homeowners, a couple with a young daughter, got something quite unexpected when they asked their interior designers at local firm Koze to include a green element in their 1,600 executive apartment (EA).

Rather than settle for conventional green design features like a plant wall, the Koze team had a radical proposal for their clients: They came up with the idea an indoor garden with a full-height tree in the centre of the flat. It’s not only aesthetically pleasing, the eye-catching feature also has different functions for different parts of the house. It backdrops and lends a softening touch to the raw industrial look of the living room. 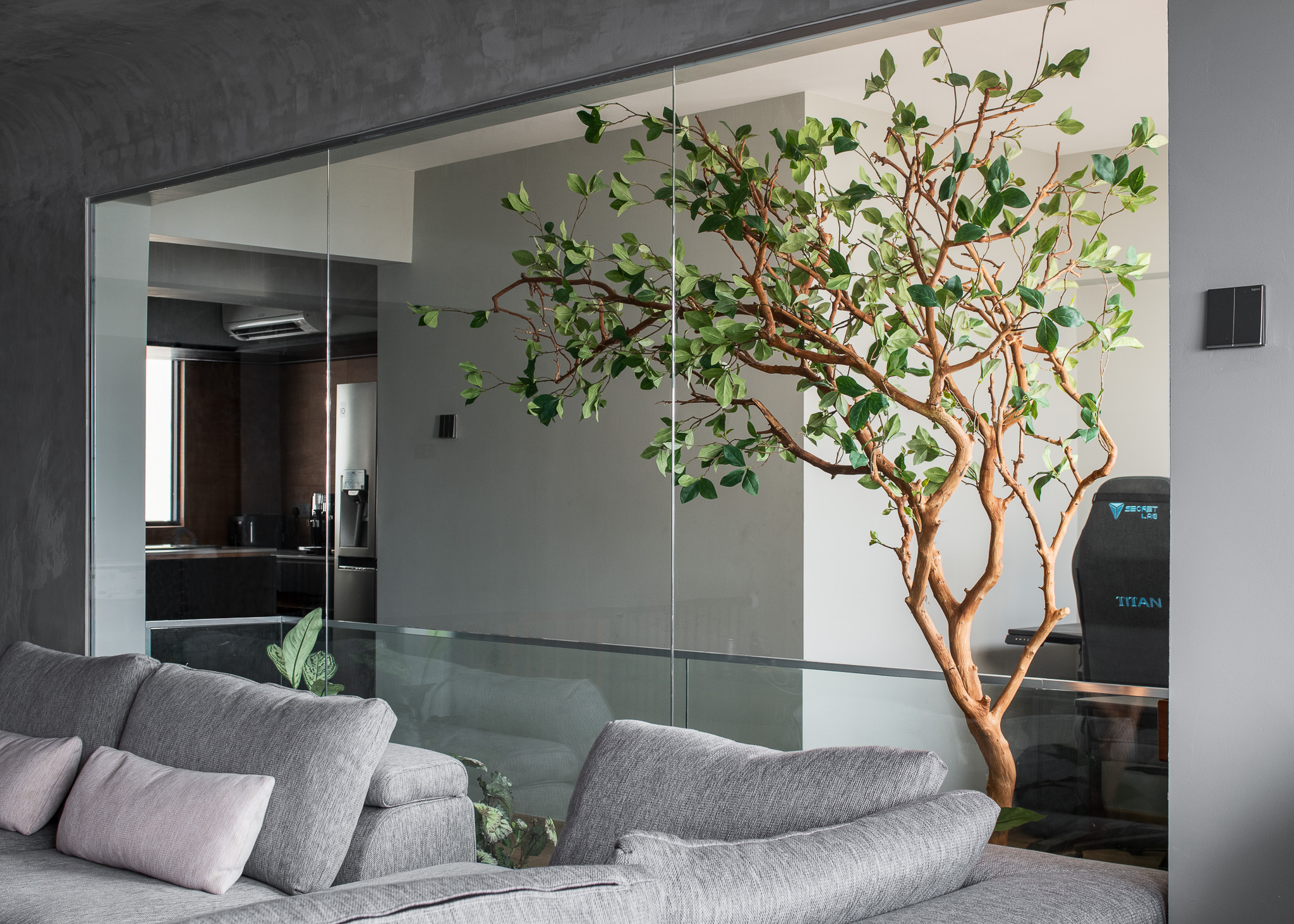 It’s also a picturesque divider between the home office and the living area. Seated at the dining area? You’ve got a meal with a garden view.

While the initial plan was to build a real garden set-up (replete with built-in sprinkler watering and drainage systems too, we’re told), the homeowners ultimately decided on an artificial landscape — they were worried that a real tree would not survive in the space which had little natural light, and that a real tree would have pests that may be harmful to their toddler and their pet pooch.

But the indoor garden isn’t the only major change in this home, which underwent renovations that cost $150K and took about four months.

Prior to the makeover, the flat, which was about 30 years old, had a dated traditional American farmhouse look, worlds apart from the modern industrial look that the new homeowners wanted. 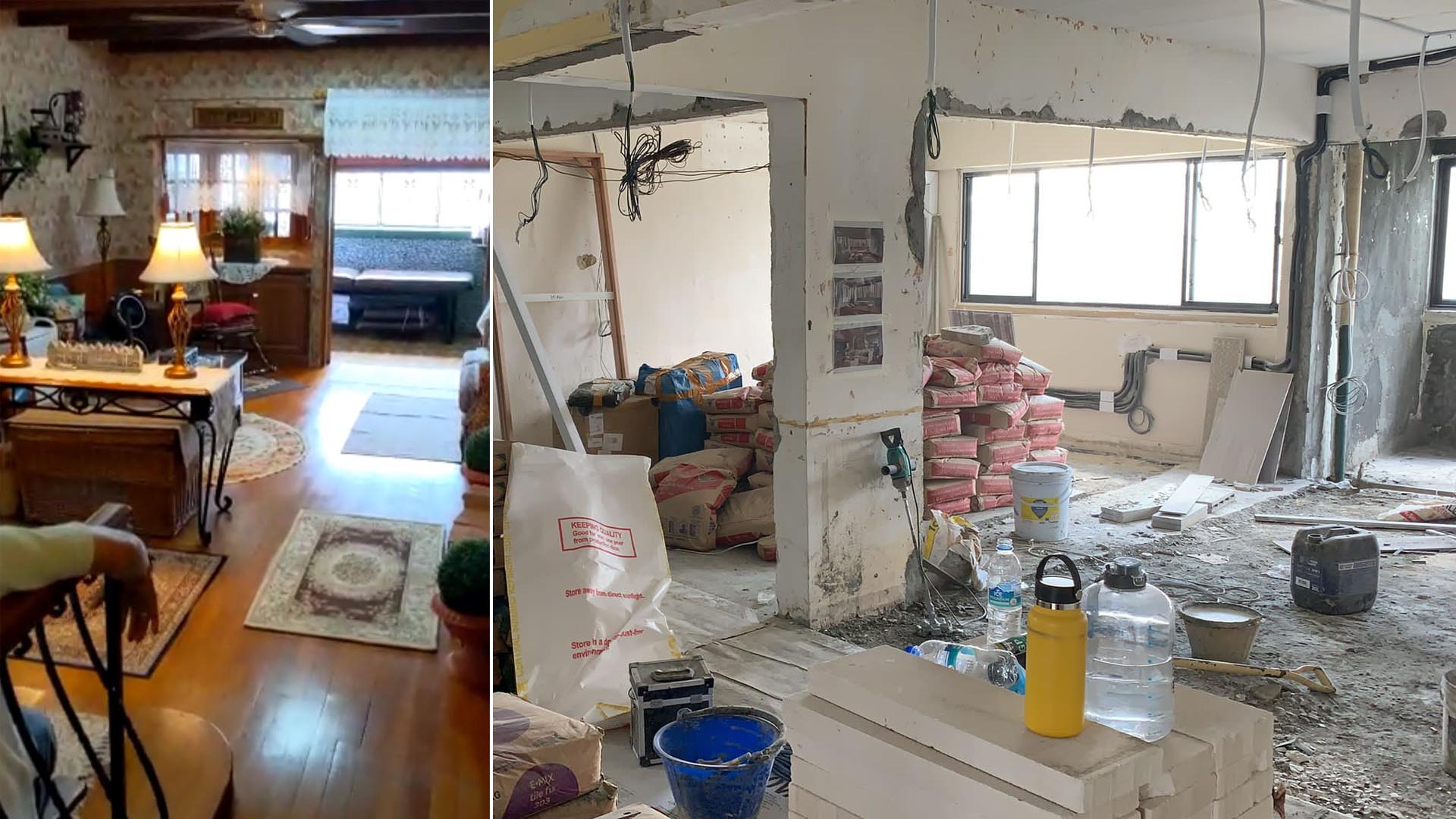 A major strip down and overhaul was in order, as was a massive layout change. Walls had to be hacked to allow more natural light to stream in, and to break up the rigidity of the original layout. 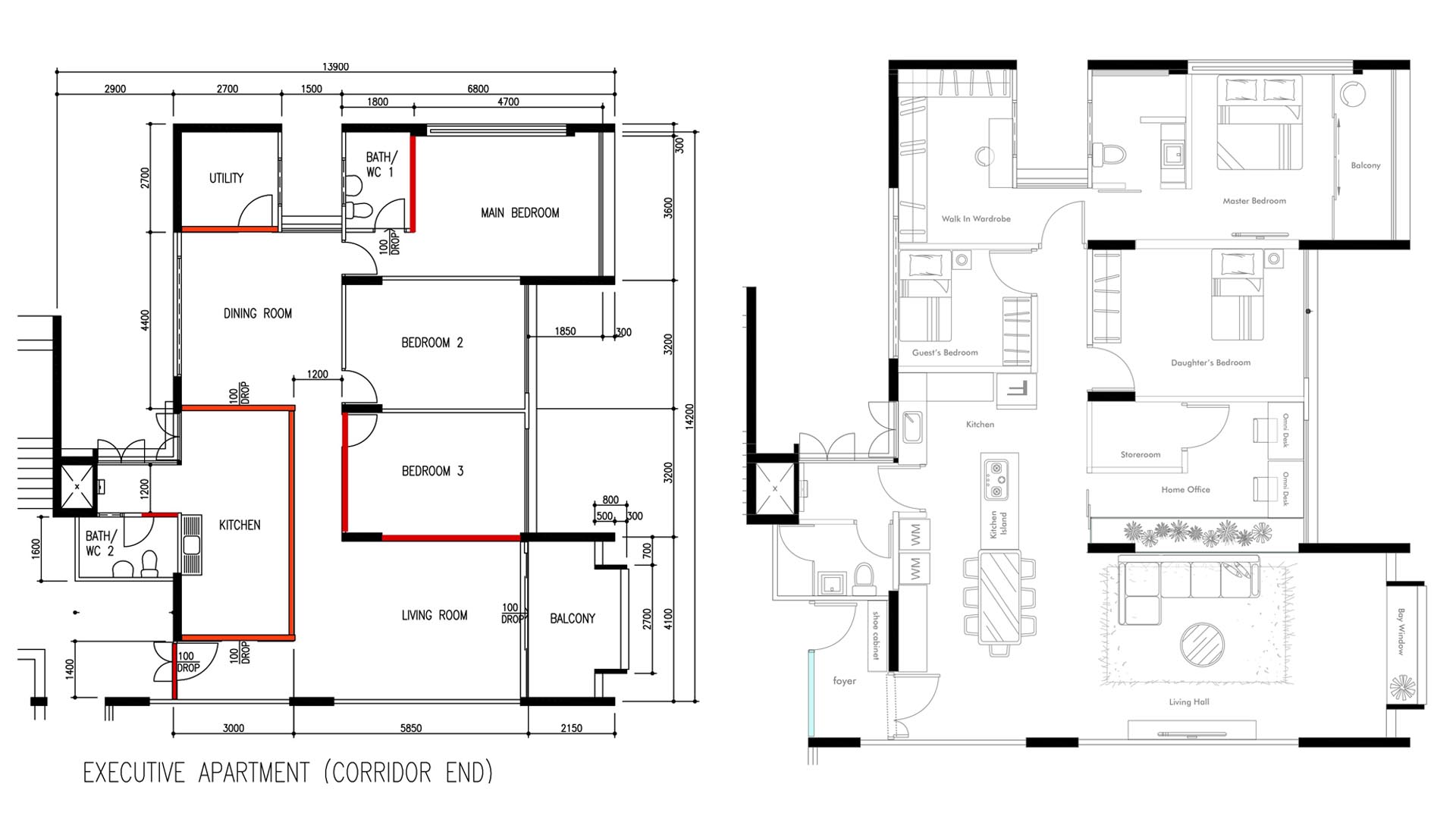 The original floor plan (left) vs the final layout (right)

While the indoor garden is decked out with artificial plants, the living room houses a real bonsai plant, perched in its own customised built-in as well. 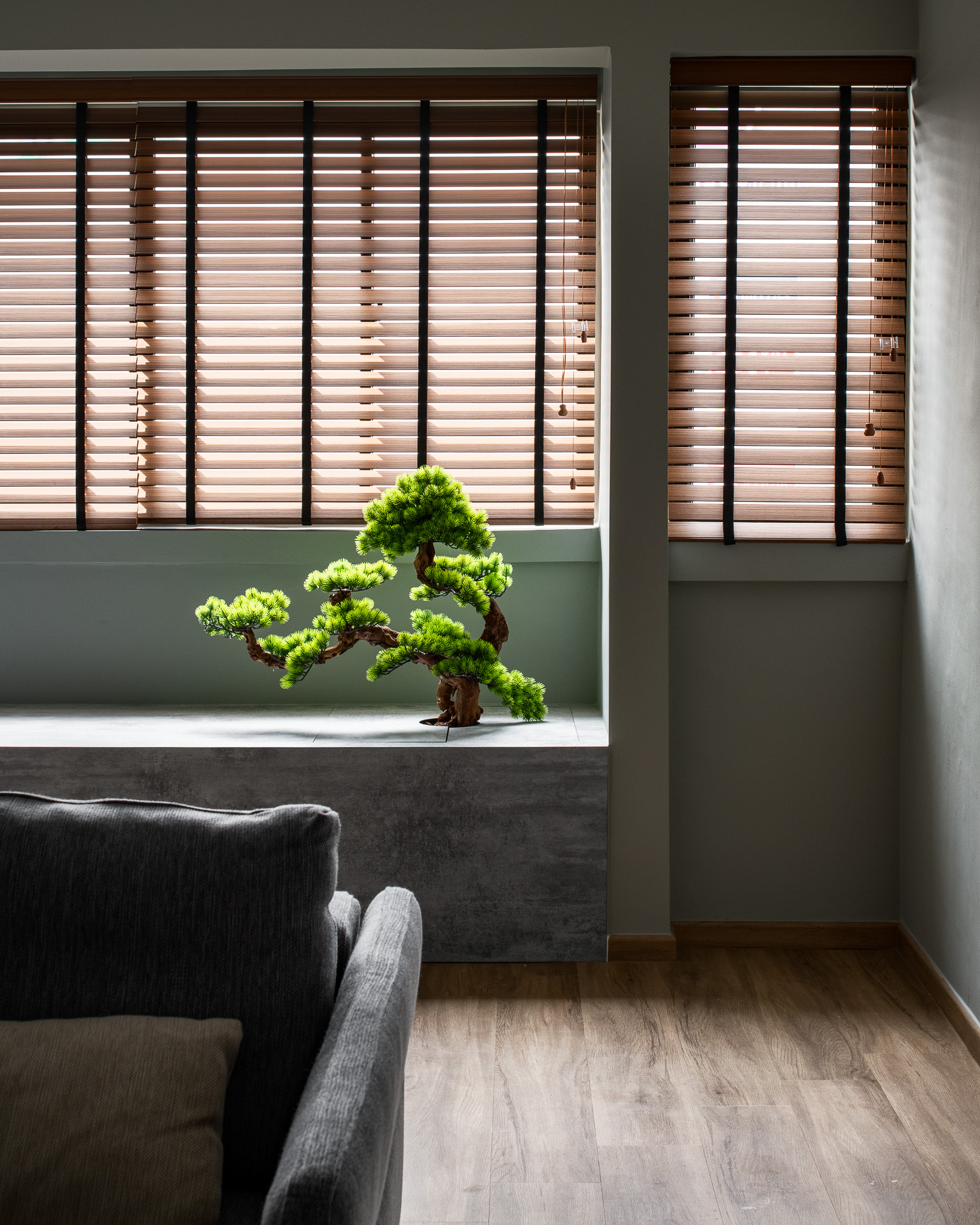 The team from Koze carved out a chill-out corner in the living room, complete with a bay window settee that has a cut-out panel that can be removed to water the plant. It’s clad in a KompacPlus Compact top finishing to withstand the morning sun, and to provide an option to order a full panel from the company should the homeowners should they decide not to have a plant in the settee in future. 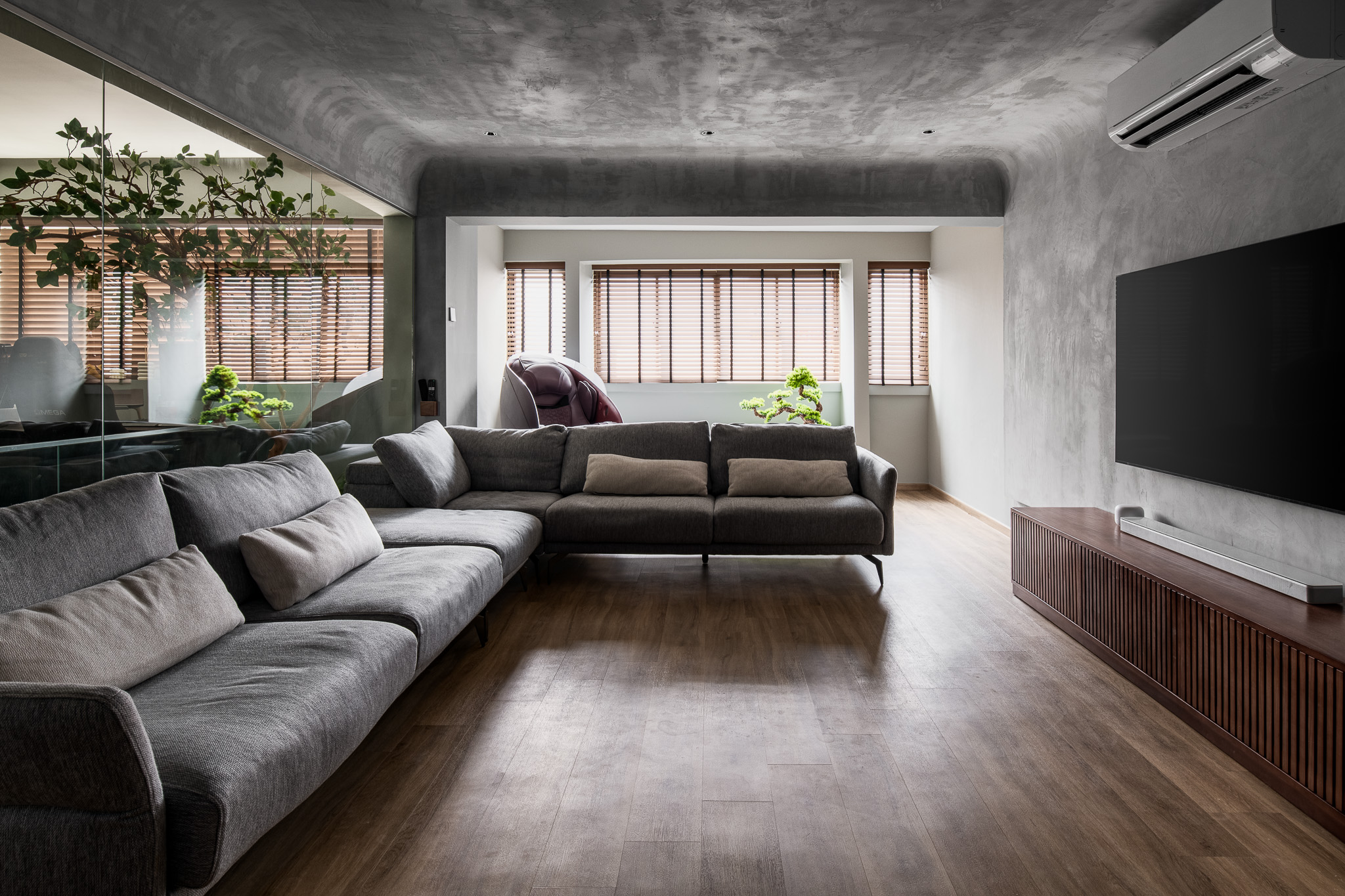 But the most visually arresting feature here is the false ceiling with curved edges, finished in a cement screeding plaster that continues seamlessly from ceiling to wall. 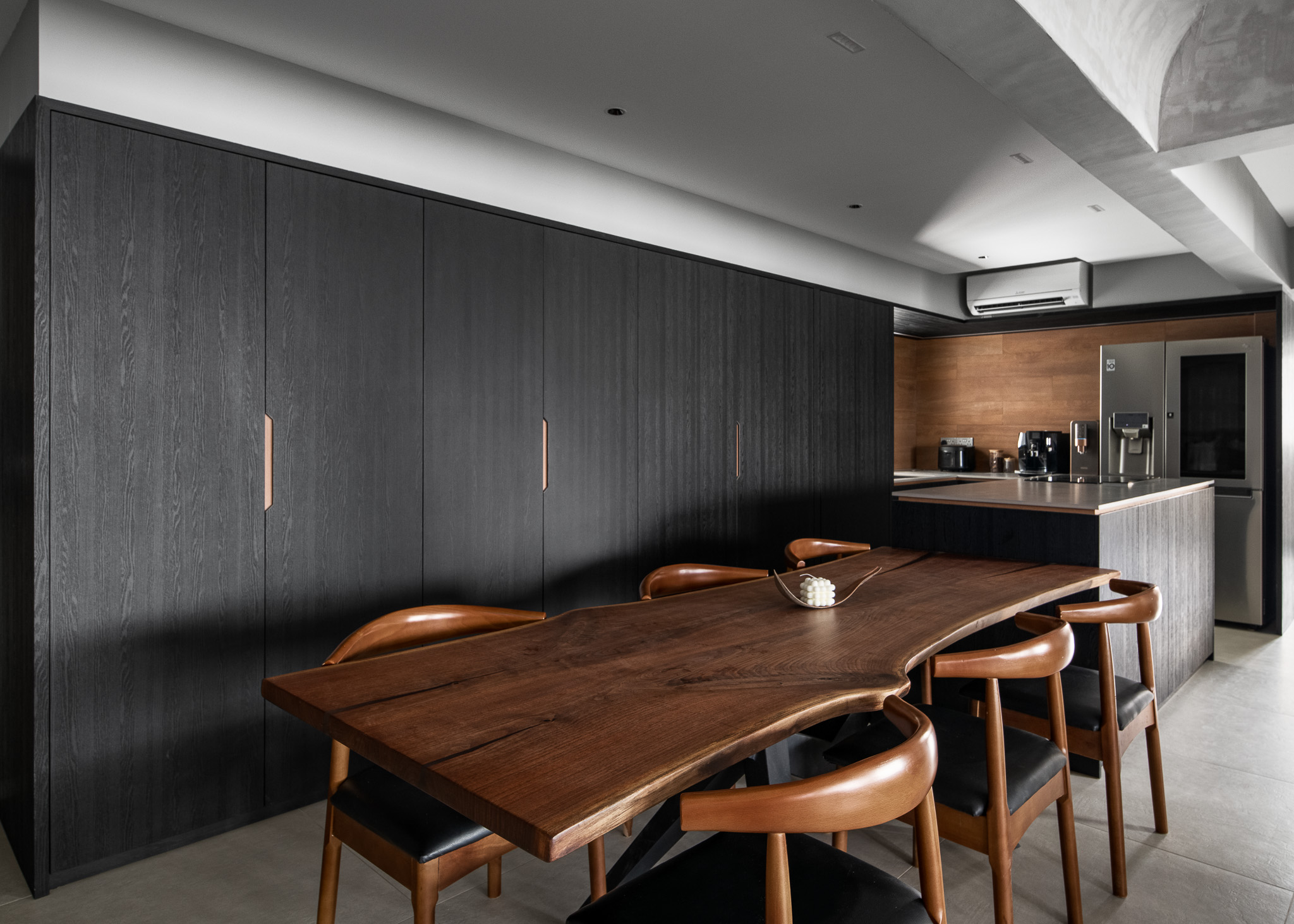 To keep the design sleek and clean in the dining area, streamlined cabinetry was built in and large format tiles were used for the flooring to minimise grout lines. 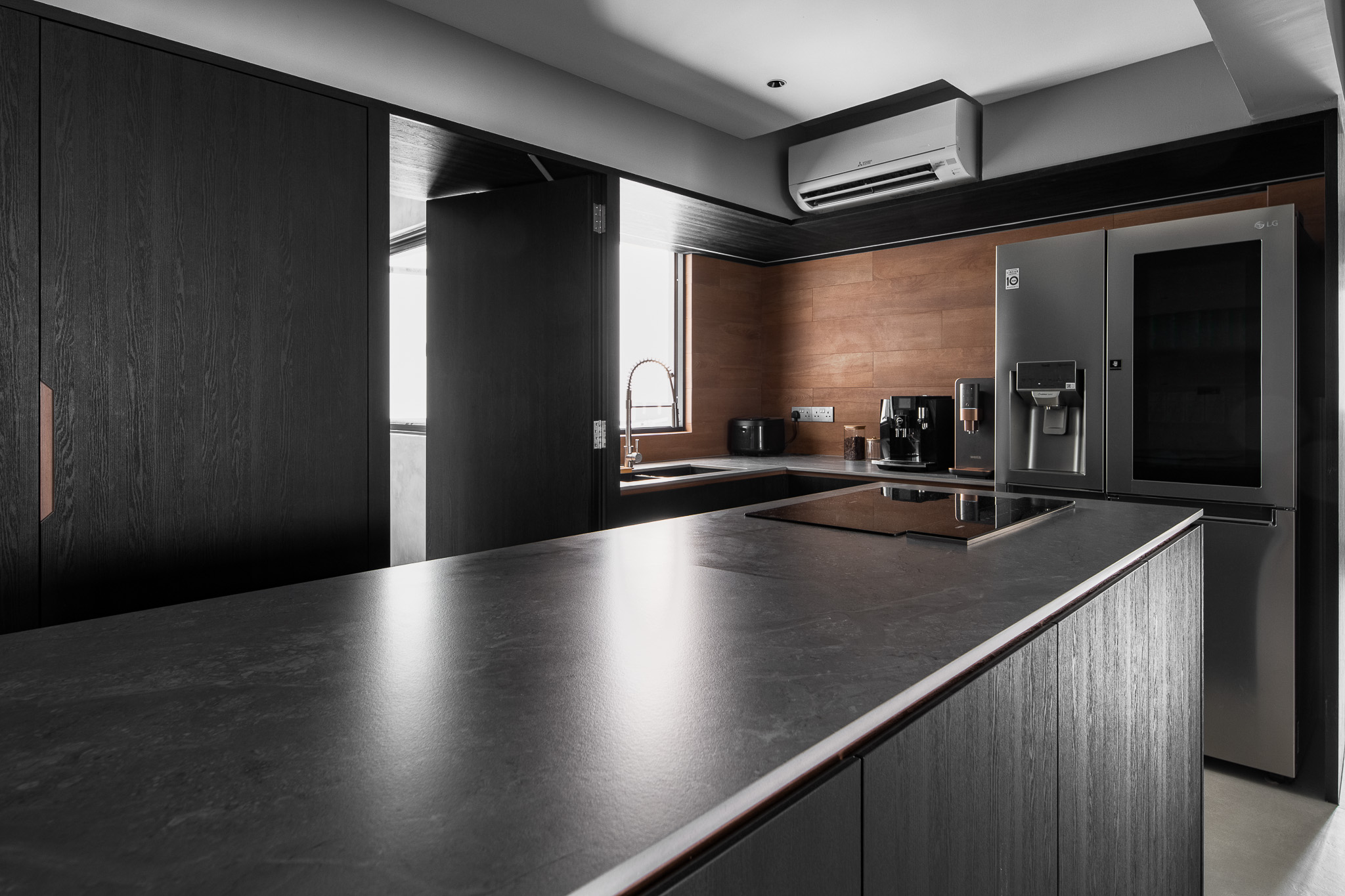 The dark tones and sleek lines continue in the kitchen, where a massive island stands, and the entrance to the yard is cleverly concealed with carpentry. 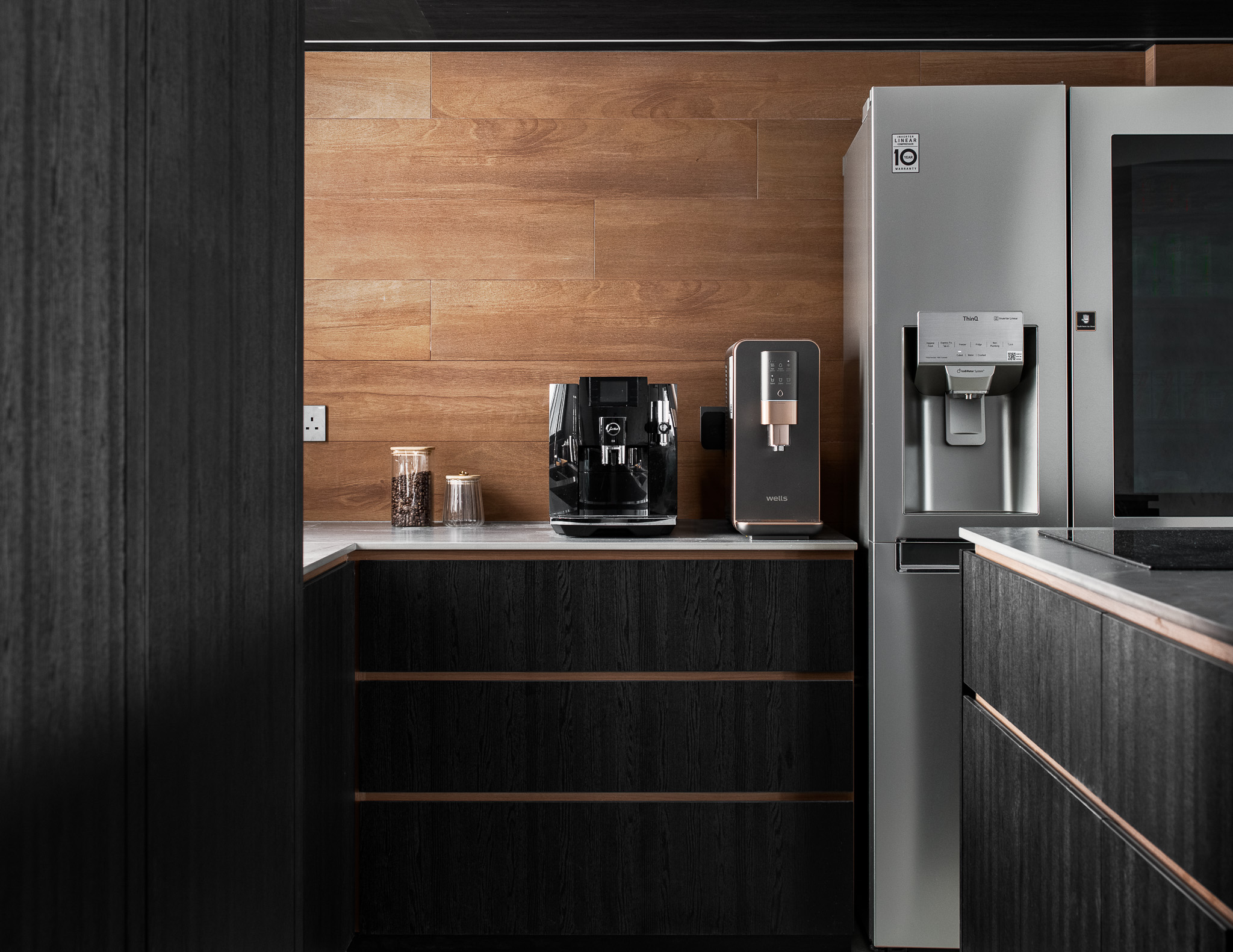 A closer look at the kitchen. 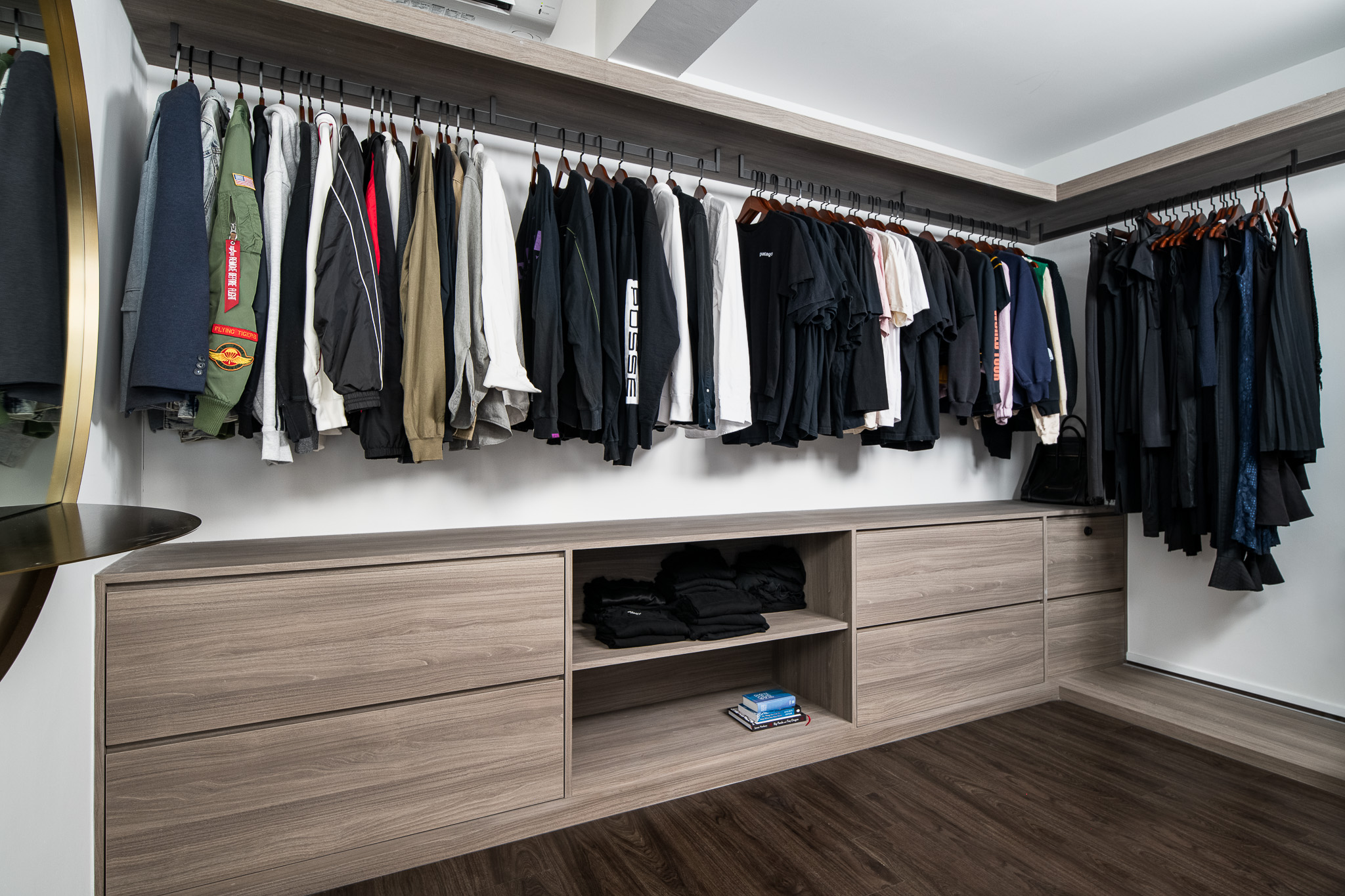 A sizeable walk-in wardrobe, which connects to the master bedroom, was carved out by reconfiguring what used to be a utility room and borrowing space from the previous dining room. The rest of the old dining room was converted into a guest room. 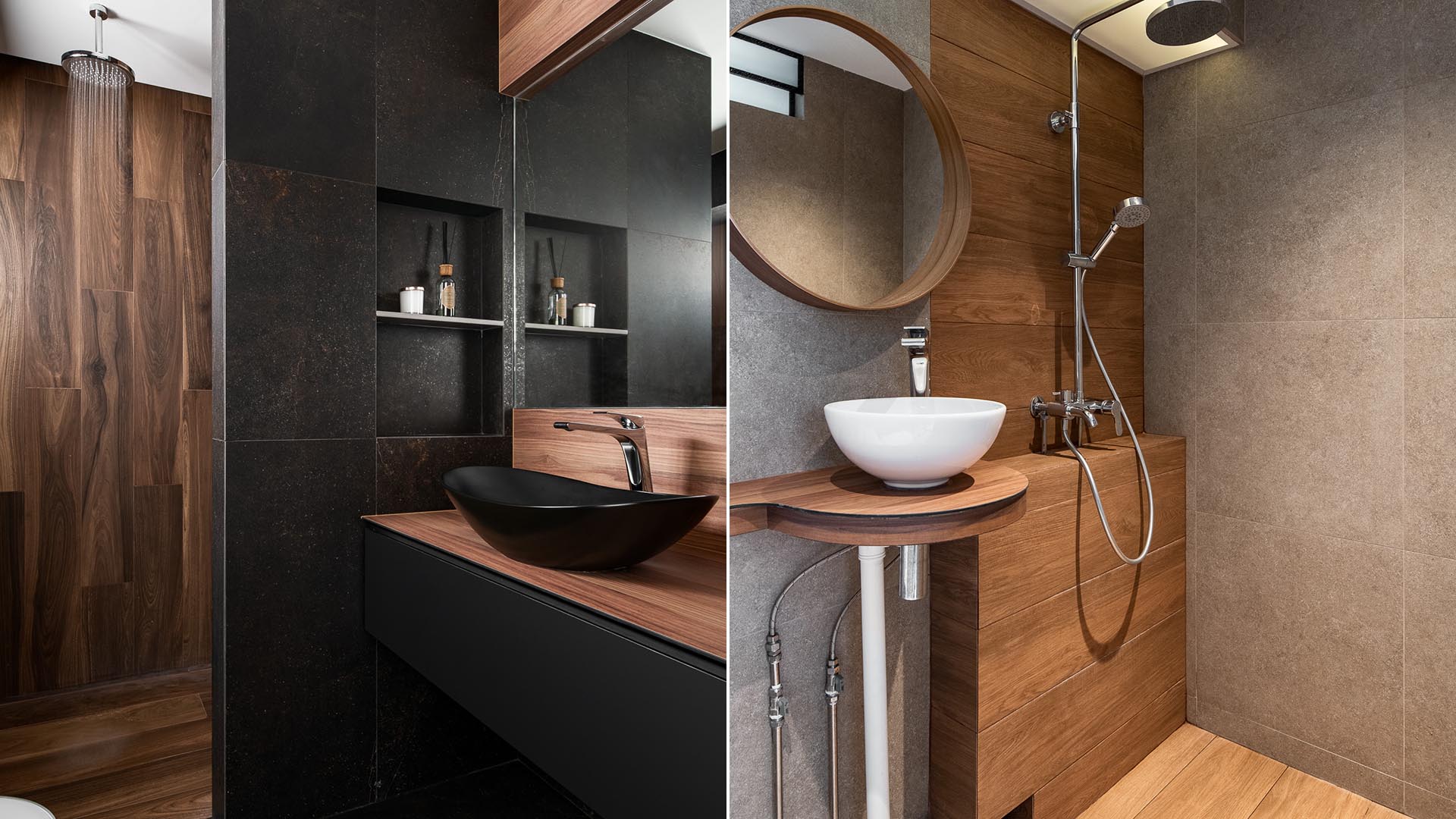 Both bathrooms are clad in wood and grey tones, in harmony with the rest of the home.