Walk in the footsteps of the K-pop idols, from where they hung out in their trainee days to recent spots they’ve visited.

For any BTS Army worth their salt, making a BTS pilgrimage to Korea is a must. Walking the same roads, visiting the same places, perhaps even tanning on the same sun lounger on the same beach that the K-pop idols once sat in.

Don’t know where to start? Make the BTS Travel Book your best friend — the must-have tome for an ARMY has a collection of places to go in Korea that BTS once visited, including music video and variety shows filming locations. BTS Army can also take a trip down memory lane and visit places where the biggest K-boyband used to hang out as trainees.

If your knowledge of Korea is limited to shopping in Myeongdong, you’ll find the book's travel and transportation tips for getting to these BTS hotspots immensely useful. Hey, it even tells you what to expect on tricky journeys to outside of Seoul and what to do if things go awry, as well as handy phrases to use along the way.

But don’t take our word for it. Here's a preview of some of the scenic spots suggested in the BTS Travel Book to get you started on that itinerary planning. 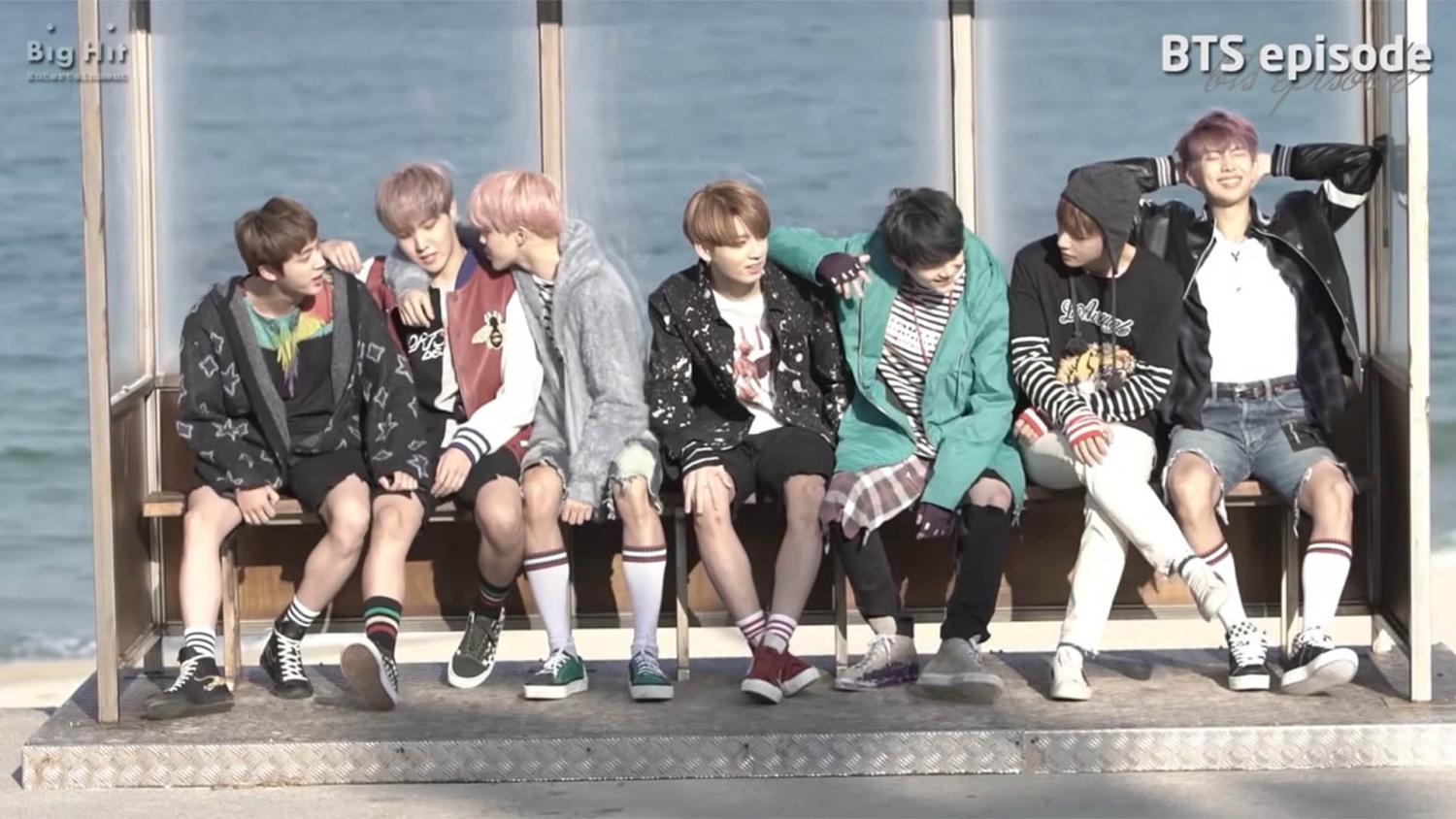 Where you’ve seen it: On the You Never Walk Alone album cover, and in the ‘Spring Day’ music video of the same album.
Where it is: The beach is located in Juminjin, Gangwon-don Province.
How to get there: Take the KTX from Seoul Station to Gangneung Station Exit 1, then transfer to Bus 300, 302, 314 and walk five minutes to Jumunjin Beach — this journey takes about three hours from Seoul. Or take the Intercity Bus from Dongseoul Bus Terminal to Jumunjin Beach (Cheongsihaeng), and this journey takes about three-and-a-half hours from Seoul.
What to know: The bus stop was actually built specially for the BTS photo shoot. However, it was later re-created as fans started visiting the beach and wanted to take photos, just like the one on the BTS album cover. Besides the famed photo spot, Hyangho Beach is popular for surfing and camping as well, so it’s best to go in the summer. 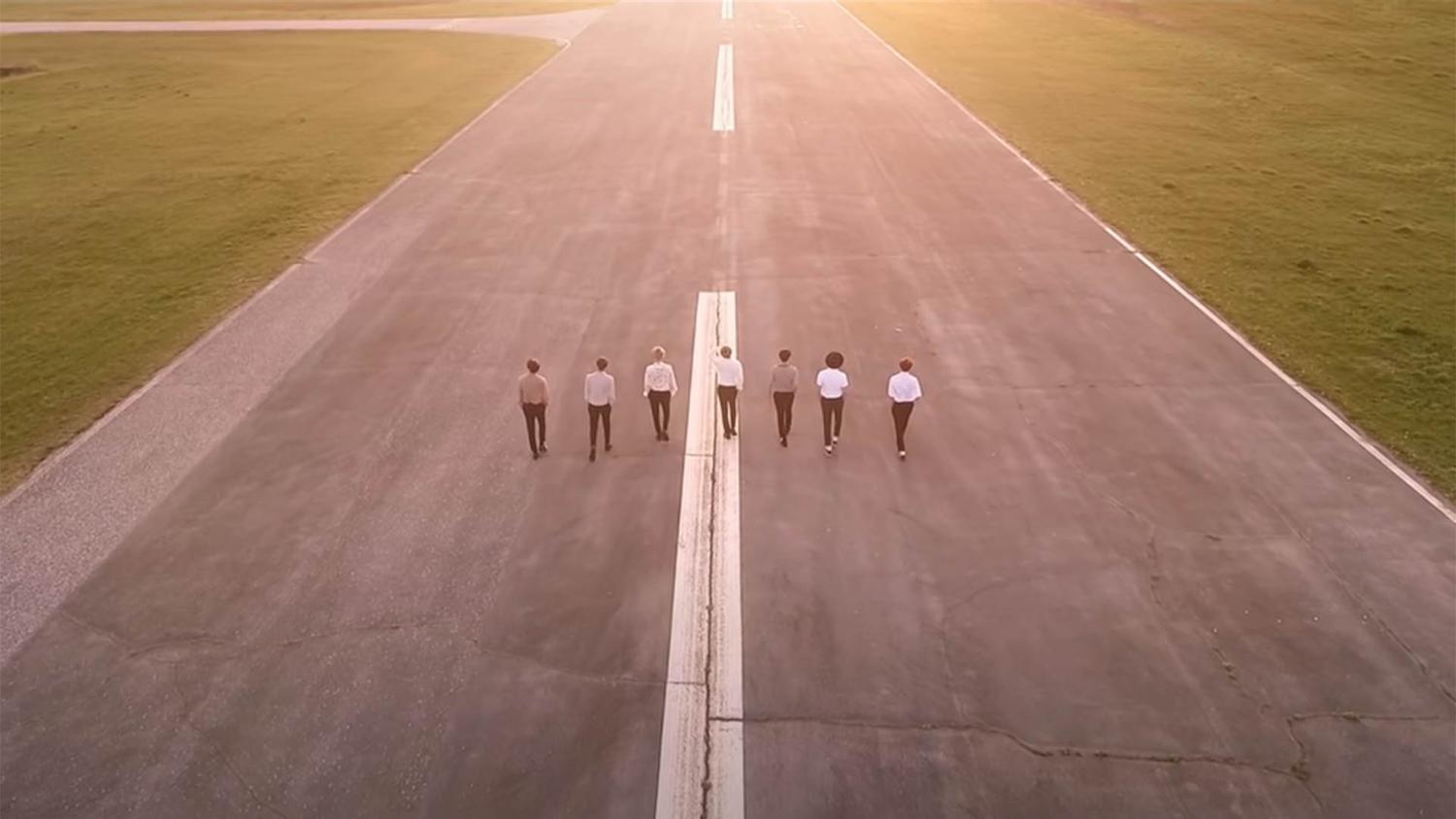 Do a runway walk at Jecheon Airfield

Where you’ve seen it: The ‘Epilogue: Young Forever’ music video their 2016 Young Forever album, where BTS is first caught in a colossal metal maze, before running toward a glorious sunset.
Where it is: Jecheon Airfield is located in Jecheon, Chungcheongbuk-do Province, about two hours from Seoul.
How to get there: Take the KTX from Cheongnyangni Station to Jecheon Station Exit 2, then take Bus 31, alight at Honggwang Elementary School Entrance and walk for four minutes.
What to know: Originally built as a military facility, the airfield is now a cultural space open to the public, and is a popular spot for music and film festivals. The maze built for the BTS shoot is no longer here; instead, there’s now a large flower garden next to the runway. However, fans can still see the word ‘Forever’ emblazoned on the runway seen in the vid. 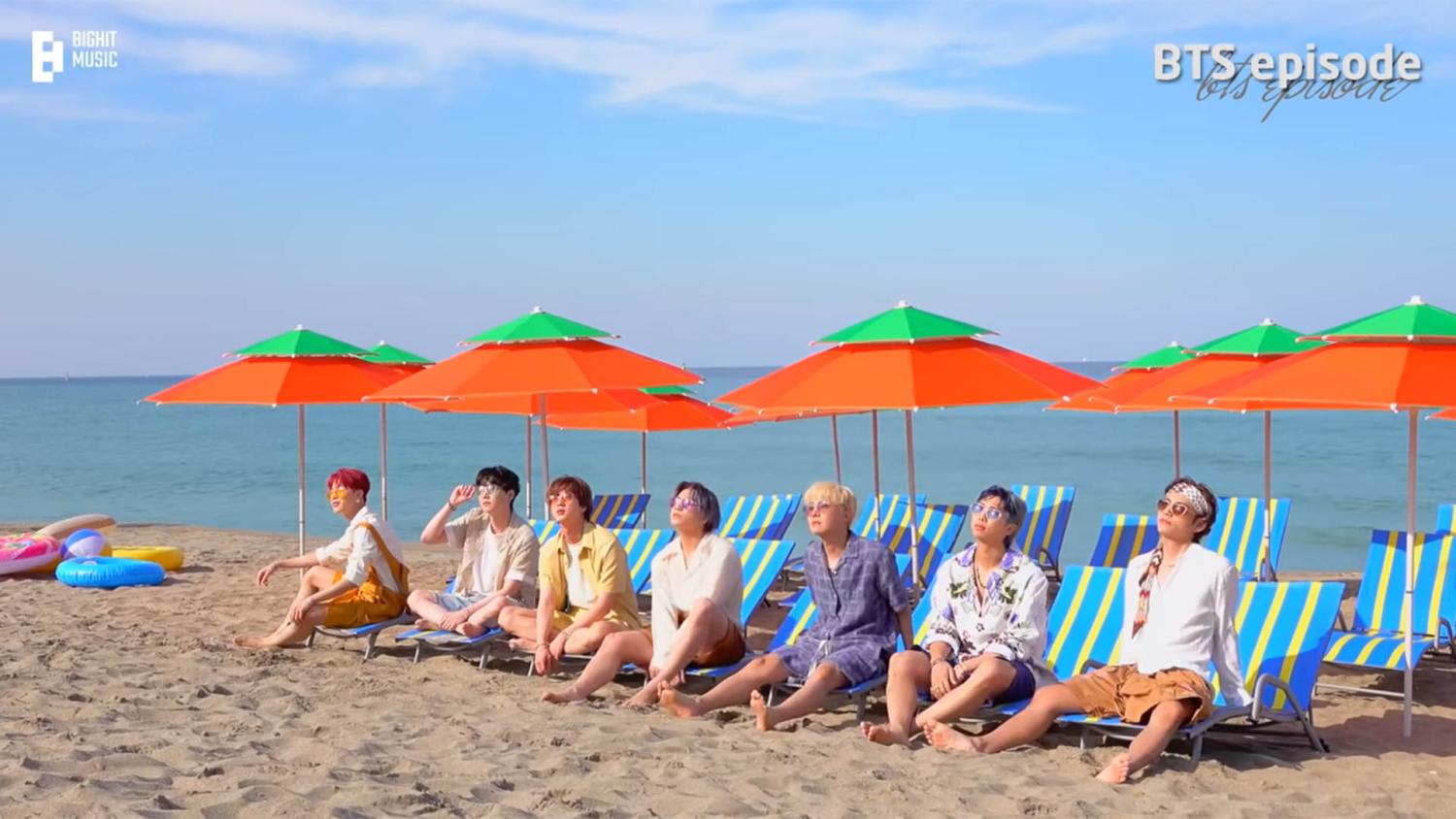 Get some Vitamin D at Maengbang Beach

Where you’ve seen it: In concept photos for Butter and behind-the-scenes footage.
Where it is: Maengbang Beach in Samcheok, Gangwon-do Province, four-and-a-half hours from Seoul.
How to get there: Take the KTX Express Bus from Seoul Express Bus Terminal to Intercity Bus Donghae City Bus Terminal, alight at Geundeok and walk 22 minutes to the beach.
What to know: It’s hard to miss the orange parasols and blue sun loungers from BTS’ album concept photo, where the septet are laying on the beach living their best life. Do note that the parasols are open from 10am to 5pm only, so plan your trip wisely. Besides re-creating BTS photos, the beach is also popular among folks who want to swim, play beach volleyball and even go camping. 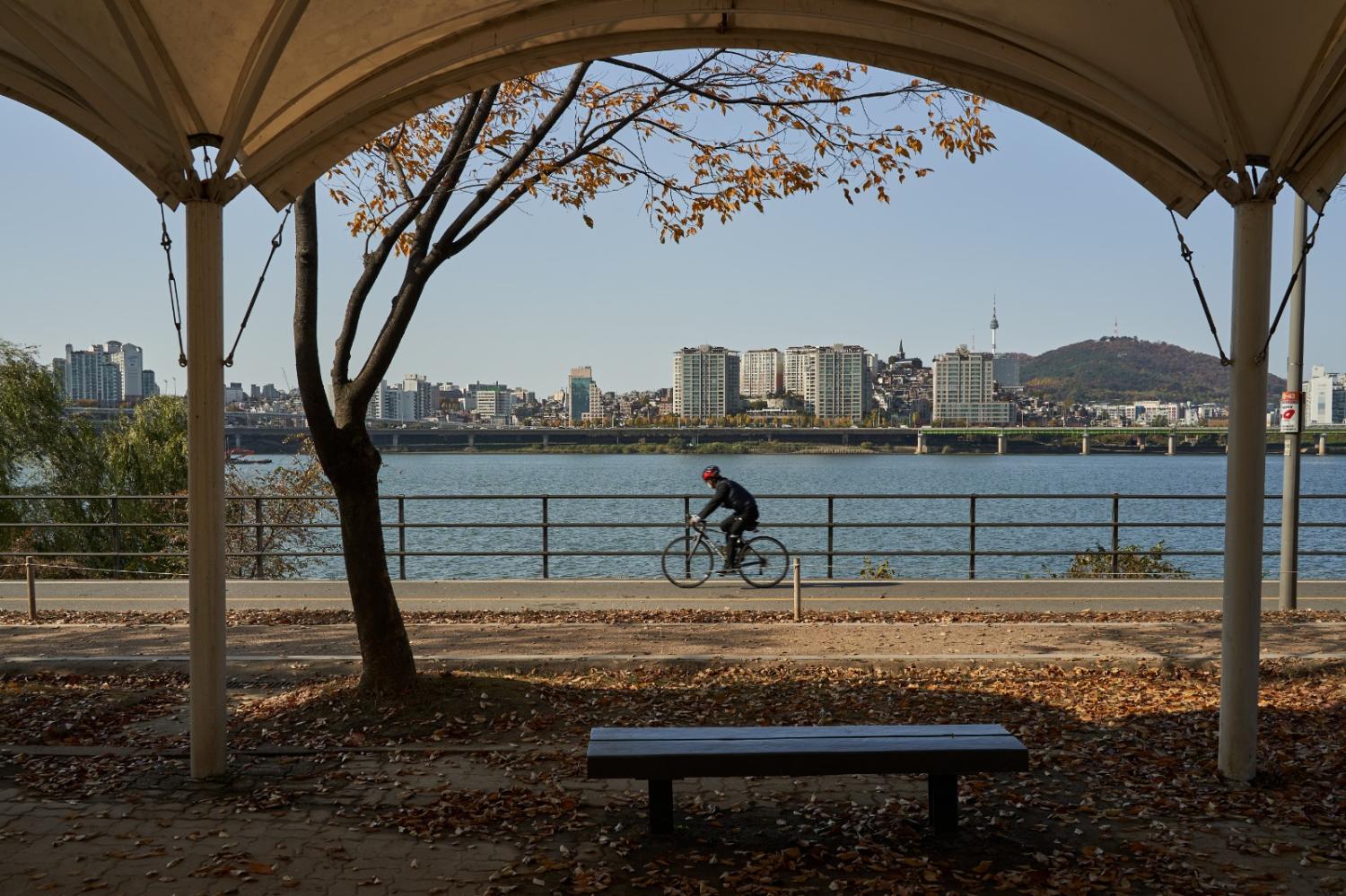 Where you’ve seen it: Run BTS ‘2022 Special Episode – Telepathy Part 2’, where BTS were handed tasks to complete, based on their memories of the park.
Where it is: In Seoul. The park, one of 11 riverside parks that are along the Hangang River in the centre of Seoul, is relatively close to one of the dorms that BTS lived together as trainees.
How to get there: Take the subway (Line 3, Shunbundang Line - Sinsa Station Exit 5) and walk for 17 minutes. Or take bus 345 and alight at 4318 – Sinbanpo #18 Apartment and walk for four minutes.
What to know: One of the goals in the game was to gather at “the part of Hangang River they [used to ride] their bikes along”. With a 5.4km-long bike path, it’s no wonder Jamwon Hangang Park is a popular spot for cycling. Visitors can also go wakeboarding and enjoy banana boat rides here. 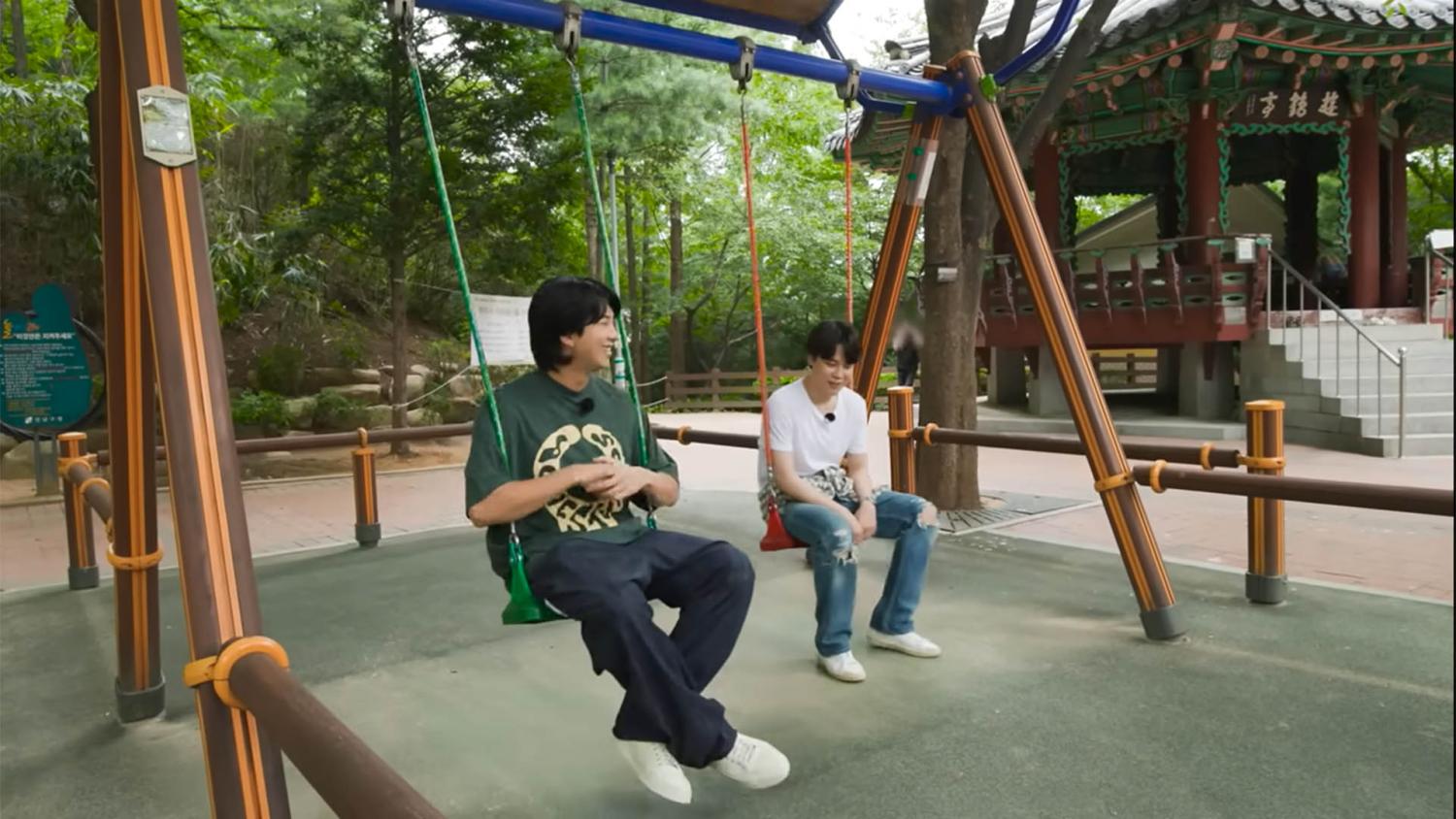 Have a swinging good time at Hakdong Park

Where you’ve seen it: Run BTS ‘2022 Special Episode – Telepathy Part 2’, where RM and Jimin are perched on swings and reminiscing their good ol’ trainee days.
Where it is: In Seoul, relatively close to Jamwon Hangang Park.
How to get there: Take the subway (Line 3, Shunbundang Line - Sinsa Station Exit 1) and walk for nine minutes. Alternatively, take bus 145, 148 or 4212, alight at Sinsadong Gogae and walk for six minutes.
What to know: Besides re-creating the tete-a-tete moment between RM and Jimin, fans can also go on trails or chill out at pavilions in the park, probably like what BTS used to do in their trainee days — the park is close to their former home. 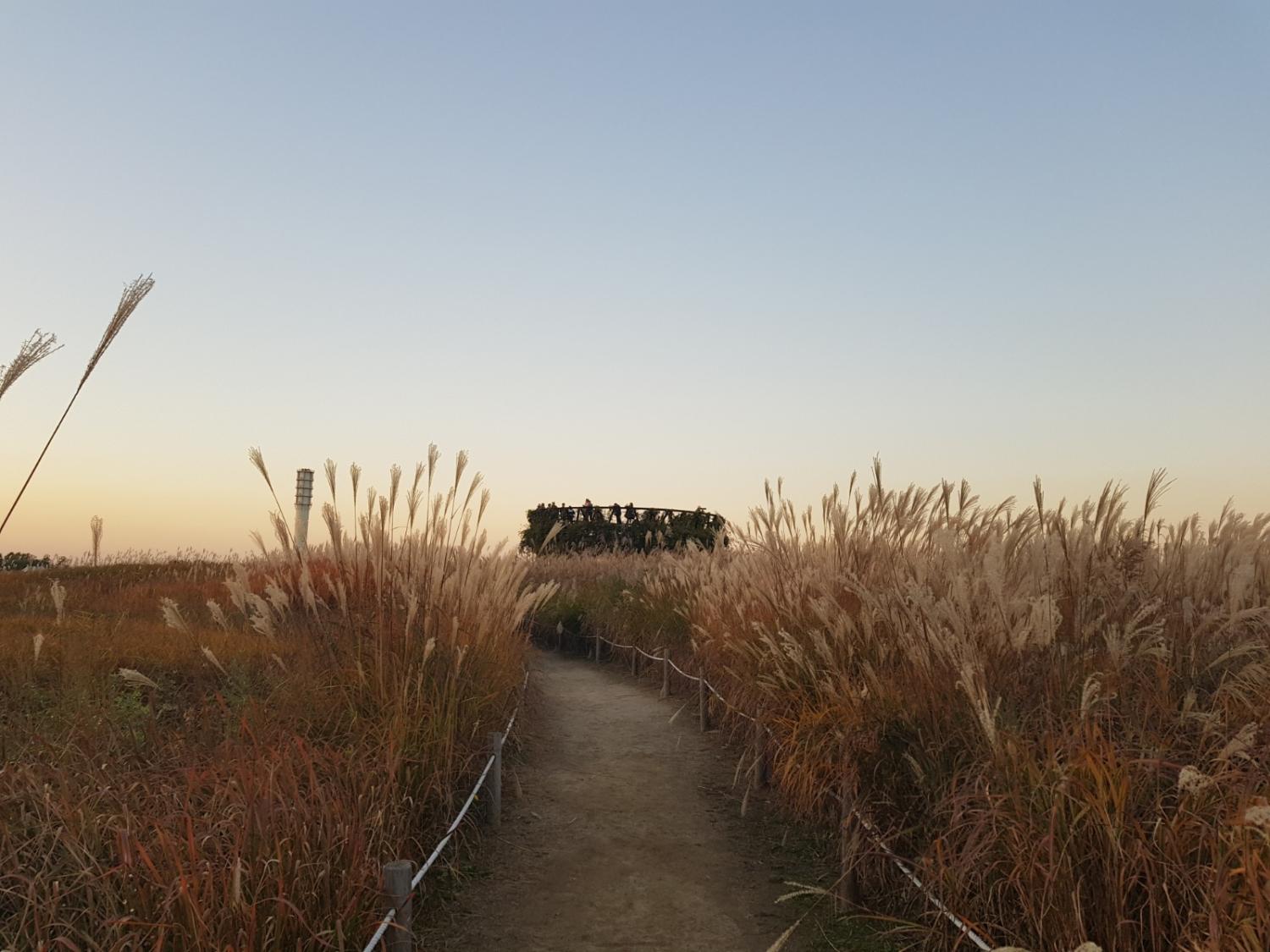 Where you’ve seen it: On RM’s socials in 2018 — the rapper posted a photo where he’s strolling among the fields — right before the Love Yourself: Answer album was released.
Where it is: Seoul.
How to get there: Take the subway (Line 6 – World Cup Stadium Station Exit 1) and walk for 14 minutes; or take bus 271 or 7011 and alight at World Cup Park, Culture Tank Park and walk for three minutes.
What to know: The park, originally a landfill site, was revived in 2002 as an ecological park for the Korea-Japan World Cup. While the views are amazing all year round, it’s especially Insta-worthy in October during fall when silver grass flood the fields of the park. Look for the World Cupdaegyo Bridge, where BTS performed ‘Butter’ on The Tonight Show Starring Jimmy Fallon.

The BTS Travel Book ($41.50) is available for pre-sale orders for meREWARDS members from now until Jan 31. Pre-order here.