SINGAPORE — The apex court has largely overturned the High Court's previous ruling over the actions of three Workers' Party leaders in relation to the Aljunied-Hougang Town Council (AHTC).

SINGAPORE — The apex court has largely overturned the High Court's previous ruling over the actions of three Workers' Party (WP) leaders in relation to the Aljunied-Hougang Town Council (AHTC).

The Court of Appeal on Wednesday (Nov 9) found that the trio had largely acted in good faith over the awarding of contracts to two engineering firms and did not owe AHTC fiduciary or equitable duties. This refers to legal obligations.

However, the court ruled that the three WP leaders — WP chair Sylvia Lim, Leader of the Opposition Pritam Singh, and former WP secretary-general Low Thia Khiang — could still be liable to pay damages over possible negligence concerning certain other aspects of their contract dealings.

In a complex 280-page judgement, the five-member court led by Chief Justice Sundaresh Menon upheld part of the appeal mounted by the trio and some others involved in the long-running legal saga.

The judges found that the trio along with others involved in the case were grossly negligent in implementing the payments process. This could give rise to the payment of damages for negligence.

They also found that Ms Lim had an additional area of negligence for failing to renew certain contracts and instead awarding them to a different firm.

This is the latest twist in a years-long lawsuit that could result in damages reaching up to S$33.7 million being paid.

The three WP town councillors — Ms Lim, Mr Pritam and Mr Low — were sued in 2017 by an independent panel acting on behalf of the WP-run AHTC as well as by the People’s Action Party-run Pasir Ris-Punggol Town Council (PRPTC).

The plaintiffs alleged that the town councillors had breached various fiduciary and equitable duties owed to AHTC, among other things, and the three WP leaders were found in 2019 to be liable for some of the claims.

In its decision on Wednesday, the Court of Appeal found that the town councillors and employees had all acted in good faith when they awarded the management agency contract to FM Solutions & Services (FMSS) without a tender.

They had also acted in good faith when they contracted third-party contractors at rates the plaintiff claimed were higher than necessary or without compliance with financial rules, the court added.

But they had not acted in good faith for being negligent on the payment process to FMSS, the apex court found.

"It bears emphasising that this judgment is confined to the narrow legal issue of the intersection between public law and private law duties, and specifically whether AHTC’s members and senior employees – the town councillors and employees – owed private law duties to AHTC in the execution of their public law statutory duties," said CJ Menon, who delivered the judgement.

The court will assess the damages for the defendants’ negligence at a later date, subject to further submissions by the parties.

Political analysts whom TODAY spoke to had differing views on the impact this judgement will have on the WP.

Law lecturer Eugene Tan from the Singapore Management University said that it was unlikely to sway the public perception of the party.

“In my view, whatever damage done to the WP’s standing has already been felt,” said Associate Professor Tan, a former Nominated Member of Parliament.

“Most people have already made up their minds about the matter and the culpability of WP leaders. So the court’s ruling will not move the needle in any big way.”

This ruling may provide relief for WP supporters, but the party would need to do more to convince the broader electorate of their operational capabilities, noted Mr Andrew Yeo, Asia practice director of Global Counsel, a public policy advisory firm.

This is because the legal battle has put into question the political integrity and municipal competency of the WP.

“The impact of today's complicated external environment on domestic bread-and-butter matters, such as employment and housing, also means that voters will be heading into the next elections with an eye on political parties that are big on not only the softer attributes of heart and values but also the harder ones of fiscal acumen and corporate governance,” said Mr Yeo.

“This is where the WP will need to make ground on.”

However, Assoc Prof Tan said that it is too early to know the full impact on the trio and the party as the legal battle is “far from over”.

“There is still the assessment of damages which might see more litigation. The defendants (Mr Singh, Ms Lim and Mr Low) will seek to keep the quantum of damages they would be responsible for as small as possible. It is for the AHTC to provide proof of how much of the S$23 million disbursed was due to the defendants’ gross negligence,” he said.

“The assessment of damages will be vigorously contested. My sense is that this matter will not be concluded before the next general election, which must be held latest in November 2025.”

Because of this, he believes that Ms Lim and Mr Singh’s parliamentary seats will not be affected for now.

Regardless, Dr Gillian Koh, deputy director of research at the Institute of Policy Studies, said the WP has put in place a leadership succession process in anticipation of the party leaders losing their seats — a scenario that has been widely discussed during the legal battle.

She noted that for one thing, Mr Low has stepped down from formal politics and did not contest in the 2020 general election.

“We will see if they have the sums to settle damages, or if they run a public crowdfunding campaign to raise what they currently do not have so that they do not face bankruptcy at least,” she said. Bankrupt persons cannot run for political office in Singapore.

“The WP does have a crop of new and younger leaders. The party itself and representation in Parliament is not in grave peril by any means,” said Dr Koh.

Collapse to view Expand to view

Separately two AHTC employees — deputy secretary How Weng Fan and her late husband, secretary Danny Loh — were also sued, along with the town council’s managing agent FMSS that Ms How incorporated after the 2011 General Election.

In finding that the town councillors and its employees did not owe fiduciary duties to AHTC, the court found that a town council’s relationship with its members and senior employees was not properly characterised as fiduciary in nature because they were executing statutory duties under public law.

Fiduciary and equitable duties, on the other hand, are duties under private law.

The court added that the nature of relationship between a town council and its members and employees was conceived primarily in political terms, given that the members of the town council were ultimately accountable to the constituents of that town council.

Since the town councilors were not fiduciaries, it follows that they also did not owe equitable duties of skill and care to AHTC.

The court found that the town councillors and Ms How had acted in good faith when they awarded the first managing agent contract to FMSS in 2011 without a tender.

This was after the WP won the five-member Aljunied Group Representation Constitutency and retained the single seat of Hougang on May 11. It formed the AHTC and FMSS was set up a few days later on May 15.

The town councillors were worried that CPG Facilities Management, which was the managing agent for the former Aljunied Town Council run by the ruling People’s Action Party, would not be committed to working with a WP-led team, the court said.

With the deadline for a handover looming, Mr Low believed it would be better to serve residents by engaging a new company made up of people who would serve a WP-led town council, the court said.

On May 30, CPG formally said that it would not be carrying on as the managing agent and FMSS was awarded the first contract on Aug 4.

“While theoretically there was still time to call a tender, there is simply no basis to find that the town councillors did not act in good faith or reasonably, or acted in breach of their duties, in deciding to proceed instead with the alternative plan they had developed, especially when this was essentially on the same terms as CPG’s contract,” the court found.

It also found that there was no breach of duties in awarding FMSS the second contracts for managing agent and emergency maintenance services. Tenders for these services were called in 2012 and FMSS was the sole bidder in both tenders. 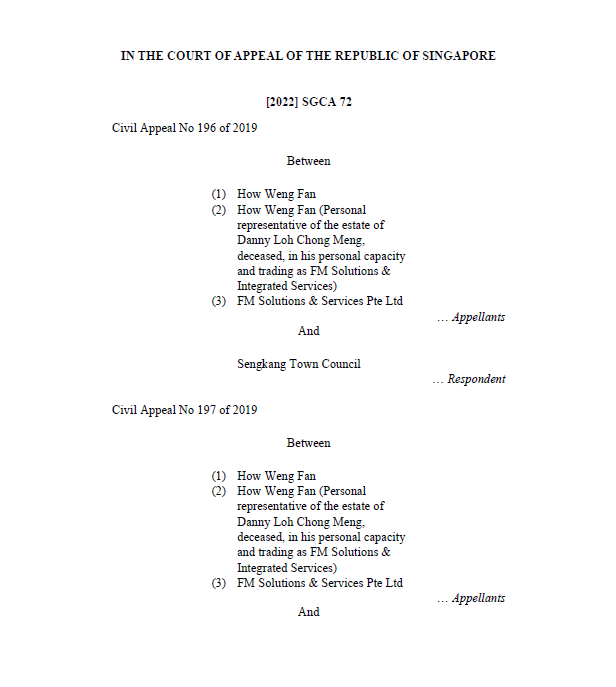