SINGAPORE — Finance Minister Lawrence Wong has been named by Cabinet ministers as the leader of the fourth generation of Singapore's political leadership, or 4G.

SINGAPORE — Finance Minister Lawrence Wong has been named by Cabinet ministers as the leader of the fourth generation of Singapore's political leadership, or 4G.

In a statement on Thursday (April 14), Prime Minister Lee Hsien Loong said this decision was endorsed by all government members of Parliament in a party caucus earlier that evening.

"This decision on succession is a crucial one for Singapore. It will ensure the continuity and stability of leadership that are the hallmarks of our system," Mr Lee said.

With this decision, Mr Lee said he will make adjustments to Cabinet appointments, which will be announced in due course.

Mr Lee, who is the Secretary-General of the People’s Action Party (PAP), said that when Deputy Prime Minister Heng Swee Keat stepped aside as the leader of the 4G in April last year, the 4G requested time to arrive at a consensus as to who should lead them, as they had to focus then on the Covid-19 pandemic.

As they worked closely together through the past two years of the pandemic, they had the opportunity to better understand each other’s strengths, he added.

“With the pandemic situation stabilised, we are now able to relook the issue of succession.”

Mr Wong has become a household name in Singapore over the past two years as he co-chaired the ministerial task force handling the Republic’s response to Covid-19.

He is also the deputy chairman of the Monetary Authority of Singapore.

Mr Wong, 49, began his career as a civil servant, with stints as the chief executive of the Energy Market Authority and the Principal Private Secretary to Mr Lee.

Mr Wong was educated at Tanjong Katong Secondary School and Victoria Junior College. He obtained his Bachelor’s and Master’s degrees in Economics from the University of Wisconsin-Madison and the University of Michigan-Ann Arbor.

He also holds a Master’s degree in Public Administration from the Harvard Kennedy School.

HOW LAWRENCE WONG WAS CHOSEN

Mr Khaw met each one of them individually, to sound out their personal views in confidence and to facilitate a new consensus on a 4G leader, Mr Lee said.

The views of Mr Lee himself and the two Senior Ministers, Mr Tharman Shanmugaratnam and Mr Teo Chee Hean, were not sought.

Mr Khaw found that the overwhelming majority of those consulted supported Mr Wong as the leader, Mr Lee said.

“Earlier today, Mr Khaw briefed Cabinet Ministers, as well as the Speaker and NTUC secretary-general, on his findings, and all endorsed the decision for Minister Wong to lead the team.”

This decision was then presented to and endorsed by PAP MPs on Thursday evening.

“The Ministers recognise that the right to lead cannot be inherited,” Mr Lee said.

“Mr Lawrence Wong and his younger team will continue to give their best to Singaporeans, and justify their trust and support.” 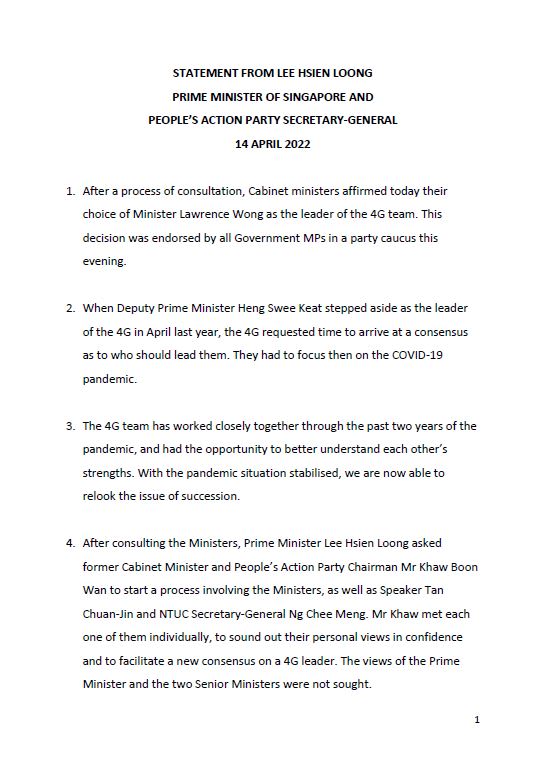