Church grouping asks for Section 377A to stay, calls it a 'marker for many social and moral considerations'

SINGAPORE — The Alliance of Pentecostal and Charismatic Churches of Singapore (APCCS) has cautioned against the repeal of Section 377A, which it sees as a “marker for many social and moral considerations”, saying that a repeal would lead to aggressive activism by lesbian, gay, bisexual and transgender (LGBT) groups.

SINGAPORE — The Alliance of Pentecostal and Charismatic Churches of Singapore (APCCS) has cautioned against the repeal of Section 377A, which it sees as a “marker for many social and moral considerations”, saying that a repeal would lead to aggressive activism by lesbian, gay, bisexual and transgender (LGBT) groups.

In a statement to the media on Friday (Aug 19), the alliance said that it rejects any normalisation of homosexuality and denounces "attempts to deconstruct Singapore’s norms on marriage and family".

“Repealing Section 377A without placing an equally weighted proscription in place will have the effect of emboldening gay activists because it shifts homosexuality away from prohibition to permission,” it said.

The alliance foresees that the “unmitigated repeal of S377A facilitates the progress of a brand of intolerant and aggressive LGBT activism, which seeks to impose its ideology upon Singapore society”.

“If done in isolation, wide-reaching negative social consequences inexorably follow — from rewriting the norms of acceptable sexual relationships, to the downstream impact of what our culture validates and celebrates in our education system, our media and public life,” it added.

The statement was issued because the group — which represents various churches, Christian organisations and pastors — said that “government ministers and their staff teams” have been carrying out ongoing consultations to engage the alliance and others on their views of Section 377A of the Penal Code, which criminalises sex between men.

Just last month on July 23, about 1,200 people attended a gathering called Protect Singapore Townhall, which its organisers said was to raise awareness of the impact of LGBTQ+ activism and to discuss how to protect marriage, family and children as the Government considers whether to repeal Section 377A.

Mr K Shanmugam, Minister for Law and Home Affairs, then said a week after the gathering that the Government is considering how to safeguard the current legal position on marriage from being challenged in the courts, after receiving feedback that most people want the present position on marriage to stay.

On Friday, APCCS said that Section 377A should be retained unless “adequate safeguards around the many areas of social vulnerability are enacted, and there is confidence that public life will be protected from LGBT activism that seeks to normalise homosexuality in our culture”.

Its view was that the issue surrounding this law is not just about its “legal untidiness”, or that it criminalises gay sex "since the prospect of that has now effectively been nullified by the courts".

“
We continue to strongly caution against removing the moral marker established in S377A, which we see as a marker for many social and moral considerations.
The Alliance of Pentecostal and Charismatic Churches of Singapore
”

The alliance also pointed out that the constitutional protections for marriage are an insufficient safeguard.

Right now, the legal definition of marriages is in the Women’s Charter and supplemented by the Interpretation Act.

"We affirm the government’s efforts to safeguard marriage and urge that the best way forward would be to entrench the definition of marriage as a union between a man and a woman in the Singapore Constitution," the group said.

Other religious groups have told TODAY that marriages between man and woman should be safeguarded.

Before APCCS, the Roman Catholic Church here in Singapore had already called for marriage to be enshrined in the Constitution should Section 377A be repealed.

LGBTQ+ groups said at the time that they have “no immediate plans” to challenge the definition of marriage in response to Mr Shanmugam's comments.

It gave examples of LGBTQ+ groups doing so, such as reports submitted by Indignation, Prout, Pink Dot and Oogachaga to the United Nations Human Rights Council. In these reports, they called for the recognition of same-sex marriages and partnerships, among other things.

Apart from preserving the sanctity of marriages, the alliance also said that “we must proactively preserve and protect the innocence of children, who are growing up in an increasingly sexualised world that prematurely exposes them to ideas that require higher levels of physical and emotional maturity to handle”.

On the other hand, the Archbishop of the Catholic Church in Singapore William Goh said the decision whether to repeal Section 377A or not lies with the Government, and the Church is neutral on the matter so long as the rights of Catholics are protected.

The Reverend Father, who was giving an interview to Chinese daily Lianhe Zaobao, also acknowledged that many people do not regard the existence of LGBT people as a problem.

They could lead their own lives, and Catholics also do not want to see them as sinners, Archbishop Goh was quoted as saying. 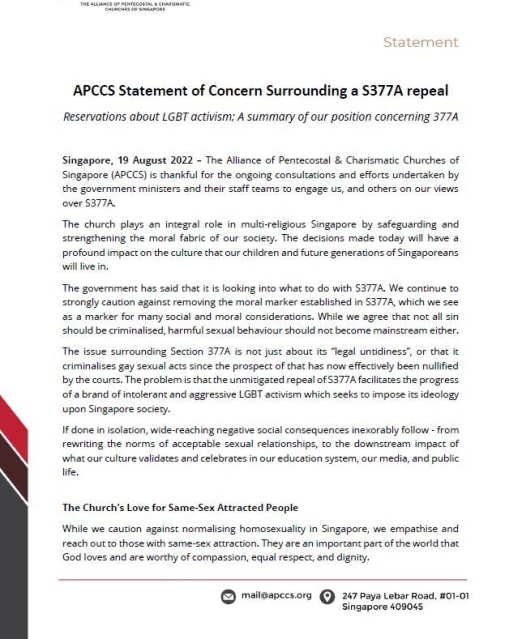