SINGAPORE — Before the Formula One (F1) race-car drivers speed on the street circuit this weekend at the Singapore Grand Prix, it was a slow-down in human traffic on Wednesday (Sept 28) for a number of businesses in the Marina Bay area, with some losing as much as half of their usual takings.

SINGAPORE — Before the Formula One (F1) race-car drivers speed on the street circuit this weekend at the Singapore Grand Prix, it was a slow-down in human traffic on Wednesday (Sept 28) for a number of businesses in the Marina Bay area, with some losing as much as half of their usual takings. Others have been taking calls from customers cancelling meal orders, table reservations, gym classes and bookings for haircuts.

As for traffic on the roads, several drivers went round in circles, having forgotten about the usual road closures after a two-year break for the Singapore leg of the motor-racing event due to the Covid-19 pandemic.

Fourteen retail shops, restaurants and service providers told TODAY that their customers were cancelling appointments and avoiding the area after the road closures started on Wednesday.

Some drivers also spoke of road congestion during the peak hours on Wednesday morning, with some confused by which roads were closed, while others forgot about the race and the related traffic diversions.

In a statement last Friday, the Land Transport Authority (LTA) said that the road closures will take place from Sept 28 to Oct 4, in order to facilitate the setting up and tearing down of structures for this year’s F1 Singapore Grand Prix.

It also urged members of the public to take public transport and plan their journeys ahead of time.

Romankan Yokohama restaurant, which is located in Millenia Walk mall, said that it would typically make around S$600 during weekday lunches, but this dropped to around S$300 on Wednesday.

An employee, who declined to be named because she was not authorised to speak on behalf of the restaurant, said that the road closures possibly deterred office workers in the Central Business District (CBD) area from driving over for lunch, which is what some regular customers typically do.

She added: “This morning, our supplier was late because of the road closures and had to go one big round to get to Millenia Walk, which is quite troublesome… we have to rush the food preparations.”

Slower business days may be up ahead as well — a regular customer had already informed the restaurant that she would be forgoing her usual Sunday takeaway because of the road closures.

“Her daughter loves our food but it’ll be difficult to drive here, so she told us last Sunday that she'll miss her (takeaway) this week,” the employee said.

Other restaurants in the mall, as well as service providers and shops, also told TODAY that they have seen a drop in sales as people avoided visiting the area — mostly due to the difficulties of navigating around road closures or to avoid traffic jams.

Mr Junior Ho, a hairstylist at Zinc Korean Hair Salon, said that about 20 per cent of its customers have called to cancel or reschedule their appointments for this week.

The same had happened the last time the F1 race was held here in 2019, he added.

Spin gym Absolute Cycle has already seen a 10 per cent drop in gym-goers who were scheduled to turn up in the days leading up to the F1 weekend.

Ms Wan Nabilah, its studio supervisor, said that most of these gym-goers have rescheduled to attend spinning or cycling sessions at its other outlets that are “more accessible”.

Over at neighbouring mall Marina Square, businesses have also seen a drop in sales on Wednesday and are not expecting more customers during the weekend.

One of them is JH Kim Taekwondo, where half of its students with classes from Wednesday to next Monday have indicated that they will give their weekly martial arts class a miss.

Head instructor Wayne Law, 30, said: “It’s mostly our students between the ages of five and 12, because their parents drive them to our studio, which is difficult to do with the road closures.

“It’s not surprising since we used to be located at Millenia Walk before moving here, and we would (also) see about half of our students miss classes because of the (road closures).”

“
While the borders have opened to a small influx of tourists, people in Singapore have also flown off overseas… The current level of tourism activity is not able to compensate for the loss in local spending.
Mr Kevin Kwok, owner of a toy shop in Marina Square mall
”

Mr Kevin Kwok, 40, owner of LittleShop Toys that sells premium children's toys, said: “This is the first day of road closures. Footfall has dropped by around 70 per cent and our sales, compared with an average Wednesday in September, have dropped by 50 per cent.

“While the borders have opened to a small influx of tourists, people in Singapore have also flown off overseas… The current level of tourism activity is not able to compensate for the loss in local spending.”

However, there were four restaurants and a florist at Marina Bay Financial Centre that said that business during lunchtime was as usual, despite being close to the race circuit and road closures.

Orders for coffee and bread continued to trickle in as Mr Ewen Tan, owner of bakery Ultra Bake, was speaking to TODAY.

“People are still going into the office because they need to work, so they need to eat. We haven't seen a dip (in sales) due to the road closures,” he said, adding that the nearby Bayfront MRT Station has made it convenient for people to travel into the area using the train service.

“Our target customers at Marina Bay Financial Centre is the office lunch crowd, so we aren’t affected since people still need to go to the office and work,” he added.

“We also aren’t open on the weekends, so we are unlikely to feel any impact from F1.”

SOME MOTORISTS AVOIDING AREA TILL RACE OVER

Having forgotten that road closures kicked in on Wednesday, Mr Terence Seah, a 49-year-old engineering general manager, arranged a meeting at Suntec City and headed off from his office in Changi.

On the way, a car accident on the East Coast Parkway (ECP) had caused a traffic jam on the highway, but traffic was still slow as he exited the ECP and headed towards Suntec City.

“I totally forgot, and definitely am going to avoid the area until the roads are no longer closed. But it’s part of life and the F1 does bring in tourism revenue, so I can’t complain too much,” Mr Seah said.

“
Perhaps LTA could provide clearer instructions on the road closures, especially when it comes to which direction the roads are blocked since there are some routes open in the morning and evening peak hours.
Mr Chia Teck Foong, who works at Centennial Tower adjacent to Millenia Walk
”

Mr Chia Teck Foong shares the same sentiment, though he hopes that LTA could make information on the road closures simpler.

The 50-year-old vice-president of Asia Pacific for an instrumentation company works at Centennial Tower next to Millenia Walk. His daily commute at around 8am on Wednesday took an extra 10 minutes.

“Perhaps LTA could provide clearer instructions on the road closures, especially when it comes to which direction the roads are blocked since there are some routes open in the morning and evening peak hours,” he said.

He also hopes that for future F1 races, season-parking ticket holders would get clearer information about which roads they can use with their pre-race and post-race labels ahead of time.

As for 46-year-old Valetia Tan, who works in the investment banking sector, she has opted to work from home for the week instead — avoiding the headaches she faced during past F1 races in Singapore while driving to and from work.

“My office is in the middle of the race track, so roads around the area are always very congested during this period. It’s also very stressful trying to figure out which roads are accessible and I remember having to circle the area quite a bit in the past,” she said.

“Some (traffic) lanes were already closed in the past week to prepare for the race, and it was stressful dealing with the heavy traffic, other irritated drivers, and blind spots in certain areas even before the full road closure.”

In previous years, her company did not have work-from-home arrangements, so the week leading up to the race weekend would often be unproductive.

“Clients didn't want to travel into the area so we couldn't have meetings. And even if we did have face-to-face meetings or called our clients instead, the sound tests from the race circuit were very loud and made it impossible to discuss anything without interruption or a headache,” she recalled.

“At least from home now, I can be more productive. I hope I’ll be able to keep (working from home) whenever the (Singapore) Grand Prix is back in town.”

WHAT TO TAKE NOTE

LTA said last Friday in a statement on its website that affected roads around the Marina Bay F1 circuit will be progressively closed from 12.01am on Sept 28 for the set-up of race infrastructure.

Motorists may use some stretches of roads during the morning and evening peak hours. They may refer to the maps given below. 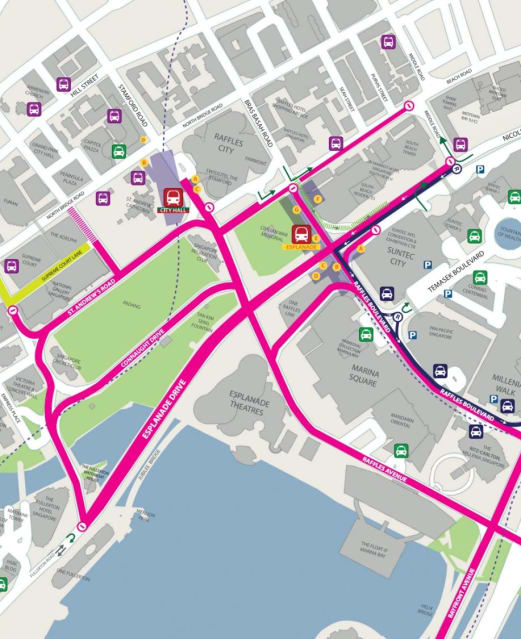